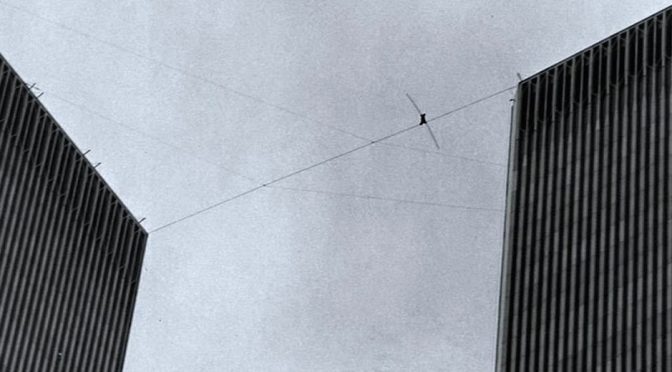 The product of the movie industry is a story . . . told primarily in visual imagery and movement, and . . . dialogue. The movie shares the function of all storytelling, of all literature, of all theater: that of a comment on some phase of existence.
—Hortense Powdermaker (1950)*

A point of view can be a dangerous luxury when substituted for insight and understanding.
—Marshall McLuhan (1962)*

What Do Movies Say to You?

Movies on Chatham publishes monthly research articles and essays on movies, typically according to a theme sequence, earning reader support as an important source of insight and critical thought on what films communicate to their audiences.

In the fall of 2019, we watched and discussed movies that either dramatize or document activities that take place within a context of technology, and in particular, the technologies of film. Continuing our theme into the spring of 2020, we shift our focus to innovative technologies.

Our coming attraction is Man on Wire (Marsh & Petit, 2008), a documentary about high-wire walking or funambulism. Most of us have seen or heard about such activity, especially from inside a circus environment, but before researching this movie, I didn’t realize how long people have been doing this. “Funambulism dates back at least to Ancient Greece — that’s where the name comes from: funis means ‘rope’ and ambulare means ‘to walk'” (Demoriane, 1989; Leckert, 2014).

Maria Spelterini, who walked across Niagara Falls in 1876, is the only woman to have done this, and she did it five times between July 8 and July 26 as part of the US Centennial Celebration. Four days after the first walk, “she repeated the stunt, this time with her feet in peach baskets. [A week later, on] July 19 she walked the wire blindfolded. On July [sic] she crossed with her hands and feet shackled” (“Circus performer Maria Spelterini”, 2019).

Jean François Gravelet, AKA Charles Blondin, was another famous performer who crossed Niagara Falls via high wire in the 19th century.

Blondin performed in China, Japan, Australia, India and throughout Europe. He soured on America in 1888 when he was forbidden to perform in Central Park and had to settle instead for St. George in Staten Island. Although he was then 65 years old, he carried his son and another man on his back and made another omelet for the crowd [while on the high wire]. By the time he gave his final performance, in 1896, it was estimated that Blondin had crossed Niagara Falls 300 times and walked more than 10,000 miles on his rope. (Abbott, 2011)

More recently, in 2012, Governor Cuomo provided a permit for Nik Wallenda to perform this walk, but with a rescue helicopter to hover nearby (Abbott, 2011; Hakim, 2012).

Last month, our focus was on “social engineering,” one of the technologies for committing computer crime. This month’s movie demonstrates a feat of engineering involving social, technical, and legal aspects. Phillipe Petit — one of the movie’s directors and author of a book about his famous 1974 high-wire walk (Petit, 2002) — demonstrates the skill and technology he required in order to accomplish the illegal act.

Since the release of Man on Wire, a drama has been produced entitled The Walk (Zemeckis, 2015), which follows the same true story and has been favorably reviewed (Scott, 2015). I wonder, though, how one can get more drama than from watching this fascinating documentary, apart from watching the real event.

What do you notice in this movie that may influence an audience about the nature of technological aspirations? We’d love to hear from you as you watch it along with us this month.

Hakim, D. (2012, Jun 15). After century-long wait, stage is set for man daring to cross the falls. The New York Times. Retrieved from https://www.nytimes.com/2012/06/15/nyregion/nik-wallenda-is-set-to-cross-niagara-falls-friday.html

McLuhan, M. (1962). The Gutenberg galaxy: The making of typographic man. Toronto, CAN: University of Toronto Press.