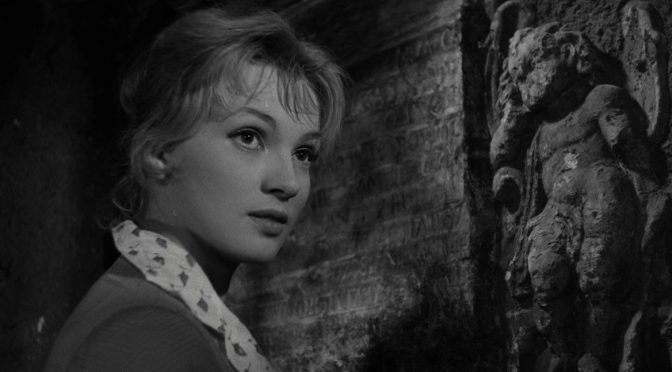 My task as director is not just to provide a nice evening’s entertainment. The most important thing is to make people think.
— Andrej Wajda, Academy Award Tribute

The Horrors of Nazism and the Tragedies of Communism

Our movie this month, Ashes and Diamonds (1958), brings the horrors of Nazism and the tragedies of Communism to the screen.

The story takes place over a twelve-hour period in Poland at the end of World War II. It is about a young Polish soldier who fought with the Resistance, and is ordered to assassinate a high-ranking Communist figure, a member of the new government of Poland. Drama, irony, romance, and unexpected twists give the viewers a thought-provoking experience.

Zbigniew Cybulski plays the role of the main character, Maciek Chelmicki. In his review of Ashes and Diamonds in The Guardian (1999), Derek Malcom describes Maciek as

a young soldier in the right-wing Nationalist Army and is ordered, at the conclusion of the war, to assassinate the newly arrived communist district secretary. Maciek is a slightly dandified Polish Hamlet who has fought in the uprising but is now uncertain about continuing to espouse an inevitably lost cause against the left. He bungles the murder, killing two bystanders.

Told to try again, he remains hopelessly riven between the demands of conscience and of loyalty, and is further up-ended by falling for a girl in the hotel at which he and the communist official are staying. She makes him feel that his lifestyle is meaningless in the new, post-war climate.

Though he manages to carry out his mission on the very evening that fireworks announce the end of hostilities . . . he is accidentally shot when running from a military patrol. He dies alone on a rubbish dump . . .

Cybulski manages, through Wajda, to express a uniquely Polish sensibility — reflecting his nation’s troubled history — as well as the kind of youthful frustrations that are still recognisable today. But Wajda’s deeply romantic and personal vision, inspired by both Italian neo-realism and by the more baroque images of Expressionism, makes Ashes and Diamonds a gripping experience too.

The title of both the movie and the novel by Jerzy Andrzejewski [1973], who also wrote the screenplay, is taken from romantic poetry [written by C. K. Norwid, 19th-century Polish poet]: ‘Will there remain among the ashes a star-like diamond, the dawn of eternal victory?’ Wajda doesn’t attempt to answer this question. And it is the film’s ambiguities . . .  that continue to render it fascinating.

The following is from an interview with Wajda, a comment about the star of our movie, Zbigniew Cybulski (Yakir, 1984):

Interview question
The two actors I associate most closely with your work are Zbigniew Cybulski and Daniel Olbrychski. Let’s talk about them.

Cybulski, more than any other actor, represented his generation. He created himself in such a precise manner that you couldn’t distinguish between his film work and his real self. He wore his own skin all the time. It was impossible to have him wear a different costume and make him play somebody else.

But these were external characteristics. Inside, what was beautiful was his sense of responsibility to the public, which I never saw anywhere else. I worked with him twice in the theater—we did ‘A Hatful of Rain’ and ‘Two for the Seesaw’, and I must say, he was born for this material.

In one performance of ‘A Hatful of Rain’ in Cracow, in a theater where he once had walk-on parts, he went on the stage and started acting. Then he suddenly stopped and said, ‘Excuse me, I made a mistake.’ And he began the play once again. No other actor would dare do such a thing, but he felt he had a right to it. He had a fantastic imagination.

You know, he was practically blind, so his eyes were expressionless. This is why a close-up of his face would reveal very little. He attempted to compensate for this by movement, by using his silhouette.

In Ashes and Diamonds, there are scenes where his legs are the most important thing in the frame — as seen in his silhouette. Directors who didn’t understand all that would not be able to convey what was special about him in their film, even though his work for them was just as good.

. . .
And, later in the interview, about what influenced him in making Ashes and Diamonds:


Interview question
What influences do you acknowledge? You once mentioned Elia Kazan, Orson Welles, and even François Truffaut.

I think that Ashes and Diamonds was influenced mostly by the American noir films such as Scarface and The Asphalt Jungle. They were beautiful films. I think that Man of Marble also bears the influence of American cinema.

We are in for a fascinating evening in the Movie Room! See you there.

The Baroque is a highly ornate and often extravagant style of architecture, art and music that flourished in Europe from the early 17th until the late 18th century.

Expressionism is an international movement in art, architecture, literature, and performance originating in Germany at the beginning of the 20th century, which sought to express emotions rather than to represent external reality: characterized by the use of symbolism and of exaggeration and distortion.

Malcolm, D. (1999, May 5). Andrzej Wajda: Ashes and diamonds. The Guardian. Retrieved from https://www.theguardian.com/film/1999/may/06/derekmalcolmscenturyoffilm.derekmalcolm

One thought on “Ashes and Diamonds: Will There Remain Among the Ashes a Star-Like Diamond”