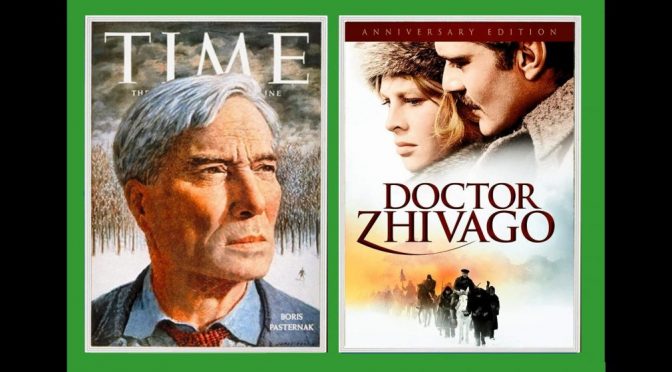 For some apolitical men, a conscientious few, ideas need not have a practical application. They are of intrinsic worth. The advantage to be gained by exploiting an idea is of no concern. These men love ideas for the sake of wisdom, tranquility, and transcendence; Zhivago was such a man.
—Ian Bloom, Illumined Illusions

I remember observing out loud to Lucy after she and I had tallied the votes for the Fall Film Competition, that the four top films seemed lacking in commonality except for their dates of release. But of course, as I expressed last month, it began to occur to me that a theme for these films might be “social defiance”.

Don’t you wonder why humans are drawn to such stories? Do we all feel powerless at the core, no matter our social position or beneficial characteristics? Jesus of Nazareth — and certainly his followers too — were defiant. Many stories in the Hebrew scriptures describe defiant acts or defiant people.

Each of us would likely be proud to carry a reputation of standing up to oppressors, if we could do this in a way that resulted in positive influence without inspiring violence. Is this fantasy part and parcel of the human race, or have we assumed this mantle because of stories and films that have such outcomes and satisfying endings?

Boris Pasternak, son of Russian artists and the author of the novel on which our movie is based, was a man of privilege, a celebrated writer of poetry and prose who lived through — and whose life was directly affected by — enormous social turmoil and political change. He was born in Moscow in 1890 into a Jewish family and studied philosophy at the University of Moscow.

We might imagine that Pasternak set out to influence others quietly and peacefully by revealing the realities of the Revolution through his writing, instead of possibly attempting to foment retaliation in kind. Through the character of Yuri Zhivago, he shows a model of humanity where caring for others rises above slaughtering people who disagree. This is a political stance many Americans adhere to according to our vision of democracy.

But, Pasternak was not free to express himself as he wished. Prior to the enduring global acclaim from Doctor Zhivago, he first achieved public recognition through his poetry, published  between 1913-1922. However, his writing was judged to be inconsistent with Communist “socialist realism“; therefore, Doctor Zhivago was rejected out of hand as unacceptable for publication.