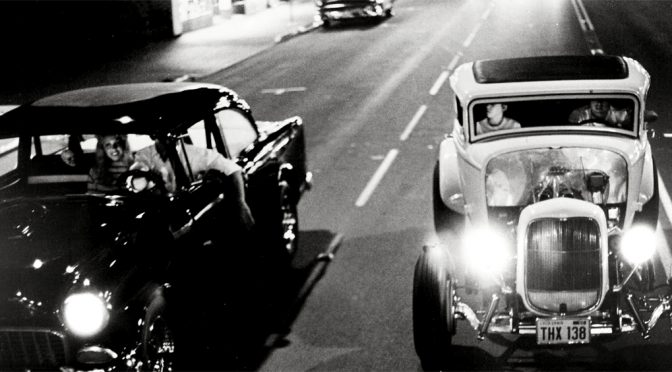 Years before George Lucas created a galaxy far, far away, where Jedi wield light sabers against the “Dark Side,” he directed a low-budget film called American Graffiti (1973) that defied low expectations and exploded with profitable success. This coming-of-age film is about teenagers marching into adulthood in the summer of 1962.  There are several reasons that this movie resonated so strongly with its audiences.

One is the time setting: 1962. I would know. I graduated from Northside High School in 1962, and our motto was, “We cover Dixie like the dew; Hooray for the Class of ’62.” That puts both George Lucas (who was born the day after I was) and me, at the same age as the characters in American Graffiti. Like Curt and Steve, I was leaving the nest and heading for college in the fall.

Along with most of America, my family and friends were surfing the wave of the prosperous and peaceful ‘50s. World War II, which was two decades behind us, was not even an active memory, as my peers and I were not born until its end.  We heard our parents talk about the “Great Depression” and saw firsthand how it influenced how they lived.  Yet, all we had ever really known was peace and stability. The big scandal? Elvis Presley gyrating his pelvis on TV!

Then President John F. Kennedy was assassinated in 1963, and our nation plunged into shock. Before it could really recover, young men were being drafted to fight a war in an obscure country halfway around the world. In protest, the hippie movement started.  Drugs were discovered, and their availability increased.  Rock ‘n Roll gave way to Rock. John Lennon flippantly claimed that the Beatles were more popular than Jesus (“More popular than Jesus,” 2016).

Another shocking assassination—Martin Luther King, Jr. in Memphis, Tennessee.  The next year, in 1969,  Man walked on the moon  with the American flag.  The 1960’s shook up America, and the ripple effects continue to this day. Political division, omnipresent drugs,  racism, terrorism among other perils have not exactly made the 21st century a time of widespread peace.   Music has gone places that would make Elvis Presley look like a choir boy. Mass shootings are happening often enough for Americans to think, “Not again!” It has been awhile since astronauts captivated a whole nation with adventures in outer space.

When American Graffiti was released in 1973, enough time had passed for it to touch every nostalgic nerve in the audience. American Graffiti gave us the chance to escape into a time that wasn’t complicated—a time when riding in a car up and down a street was considered an exciting pastime.

But in our era, it was more than just a pastime. It was called “cruising,” and it was uniquely American.  Cars were a big part of the culture then. Teenagers would cruise to seek peers, romance, and to see-and-be-seen. In Atlanta, the popular cruising destinations were the Varsity and a drive-in on Peachtree Road called Rusty’s.

It had been over 50 years, but I got to experience the joy of cruising again recently when Jerry Hassebroek suggested that he, Pam, Judy, Jayne, and I cruise down Elk Avenue in Crested Butte, Colorado in his “Pimpmobile.” (We were there for the Crested Butte Film Festival.) Cruising in the Pimpmobile was a joy that only some would understand, and of course those would include George Lucas.

George Lucas was fixated with cars, and originally aspired to be a race car driver, but a terrible wreck in June of 1962 caused him to pursue other interests such as film making.

George Lucas also wanted to explore man’s relationship to technology and machines. By making cruising a major theme in American Graffiti, he accurately portrayed how cars shaped the social lives of young adults. In anthropology-speak, cars actually played a role in the mating rituals of the 1950’s and ‘60’s.

By putting “Wolfman Jack” in the cast, who was a famous disc jockey of the time, George Lucas made another point about how technology influences man to feel closer to a public personality than his own next-door neighbor—a phenomenon that we saw through the 1980’s and 1990’s with Princess Diana, and which we continue to see today with Facebook and all forms of Social Media.

American Graffiti is a time capsule in itself. Having an interest in anthropology, George Lucas simply intended to document his own era in the movie, and as a contemporary, I will say that he succeeded.

More popular than Jesus (2016). In Wikipedia. Retrieved from https://en.wikipedia.org/wiki/More_popular_than_Jesus

One thought on “American Graffiti: How Time Flies When You’re Cruising”