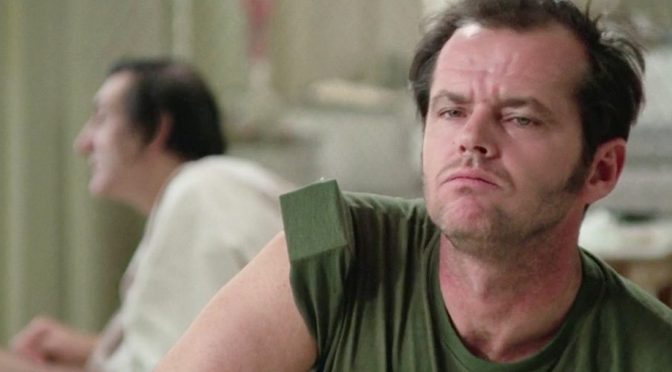 Was the film a metaphor about society? . . . To which Forman replies, it was more ‘a metaphor for any kind of modern society today,’ as it revealed ‘how far has the power the right to crush an individual who is questioning the rules.’
—Paul Gallagher, Dangerous Minds

Do we call them “crimes of insanity” when we associate crimes involving illegal drug use with criminal behavior? Does anyone ever think about One Flew over the Cuckoo’s Nest (1975) and associate that movie with the American ’60s counterculture?

Ken Kesey, author of the novel from which the movie was adapted (1963) , was a Stanford student and an acid-head during the days of Haight-Ashbury and Woodstock. Would knowing that change your perspective on what he communicated? .  .  .  or why?

Similarly, Miloš Forman, the Czech American director of our movie, had strong feelings about social systems, revealed in his response to a question about this movie (Forman cited in Smith, 2012),

What are you talking about, Americana? For you it is a work of literature, it’s fiction. For me it was reality—I lived it! The communist party was my big nurse! What’s the difference?

Seems obvious, when you understand his context, that Forman would see the setting of the mental hospital as a social system where people are abused and exploited. Should we call this kind of incarceration a crime of insanity?

The World Capital of Madness

Kesey actually came by his insight first hand. He first aided the US Army as a volunteer in testing mind-altering drugs at the VA hospital. He then worked there as an attendant in the psychiatric wards, which gave him information and inspiration for his now-famous novel. He also began to use the military’s LSD, which was not illegal at the time, as backdrop for drug parties (Biography.com, 2016),

With his profits from the book, Kesey moves to the hills above Palo Alto, where the acid-tests grow more experimental. Hunter S. Thompson, renowned for his own brand of insanity, calls it ‘the world capital of madness’.

One might think that Kesey had totally removed the setting of the movie from the setting of his life by using the story frame of R. P. McMurphy as a convicted criminal. Yet, maybe it was simply prophetic that Kesey’s exploits were temporarily interrupted when he was charged with marijuana possession, faked a suicide note, and fled to Mexico to avoid incarceration. However, after returning to the US the following year, he served a six-month sentence on a work farm before resuming his earlier activities.

Kesey also introduces the idea that his own crimes were based on insanity (Murdock & Navasky, 2002). If you have further interest in background materials for this movie, I urge you to look around among the resources at Cinephilia & Beyond.

‘One Flew over the Cuckoo’s Nest’: Miloš Forman’s mosaic of brilliance with a lesson still as important as ever. (2018). Cinephilia & Beyond. Retrieved from https://cinephiliabeyond.org/one-flew-cuckoos-nest-milos-formans-mosaic-brilliance-lesson-still-important-ever/