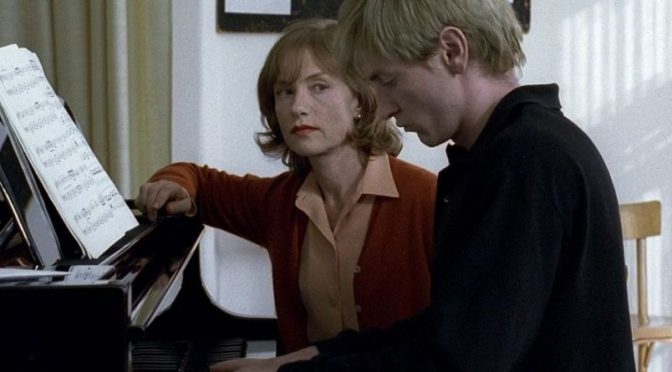 Typically Haneke, the protagonist’s extraordinarily odd behavior . . .  is never explained or justified in any psychological way. Wildly explicit and violent rape and bondage scenes are as ever rendered disturbing and not titillating.
—Mattias Frey, Senses of Cinema

La Pianiste at times seems like an introduction to the writings of Freud . . .
—John Champagne, Bright Lights Film Journal

In a further exploration of themes of alienation and voyeurism, Haneke portrays the sadomasochisticsexual relationship between repressed piano teacher Erika Kohut (Isabelle Huppert) and her pupil Walter (Benoit Magimel). Both actors won awards at Cannes and the film won the prestigious Grand Prix.
—Elizabeth Day, The Guardian

At first glance, in analyzing our November film one might consider the similarities between stories in Behind the Candelabra (our May feature about Liberace and his relationship with Scott Thorsen), and The Piano Teacher (2002) ( our November film about a teacher-pupil romance). Each of the two stories has a main character who is in a relationship where a power imbalance exists.

In each case, the relationship is carried out in secret because it violates social norms. Each has a main character who exhibits behavior that runs counter to norms and values, possibly imbued with neuroses, and is an accomplished pianist. Therefore a piano is also a common element between the two movies.

With these observations, one might jump logically to the conclusion that neurotic instability relates somehow to a piano. This represents the difficulty in pursuing knowledge with inadequate information.

How to Investigate Neurotic Behavior?

If we wish to expand our search for what may cause neurotic behavior, how might we go about it? First, we may personally know people who play the piano who don’t fit these descriptions and/or people who don’t play the piano but are mentally distressed. So, we could continue to search for other instances of these characteristics and in this way rule out the piano as a causal agent.

How might Freud have approached this project? Freud was an MD, a dedicated scientific researcher in the neurology field, who in his practice observed people suffering from various pains and incapacities to cope and/or be productive in society, but with no real physical abnormality.

He pursued better health for his patients by careful observation of their symptoms, by listening intently to their histories, and by learning as much as he could from the work of others in his field. These are the methods of case study, qualitative research that typically includes only a single setting or a small number of people or sites.

Cocaine as a Possible Treatment

At first Freud became enamored with cocaine as a possible medical solution for such symptoms with no physiological origin. However, after a while he realized that the side effects of cocaine were intolerable and abandoned this in favor of a psychological solution.

It has been said that Michael Haneke, director of The Piano Teacher, has presented Erika Kohut in such a way as to be a textbook example of Freud’s concept of the mind. A woman otherwise normal, who was isolated by her mother from childhood, without siblings or social life, with no way to release unconscious drives until she exploded inside her body no less than if she had swallowed a bomb.

Freud’s investigations led him to concepts and constructs that formed the basis of psychoanalytic theory. One of the fundamental concepts for understanding human nature from a scientific point of view is the psyche, i.e., the forces in an individual that influence thought, behavior, and personality.

Jung applied Freud’s model of a conscious and unconscious psyche to develop a theory of neurosis. Based on the premise of a self-regulating psyche, Jung posited that a neurosis is a “significant unresolved tension” between opposing attitudes of the ego and the unconscious.

Someone who perceives a neurosis as an illness that can be prevented will expect a doctor to have a quick cure. S/he may also understand fantasies as unreliable subjective experiences. Of course, some illnesses are more obvious than others, as the following 5 minute video will attest. (You may wish to turn up the sound on your device before you click the link.)

French psychoanalytic feminist film theory
“Feminism” is about equality of the sexes, and activism to achieve such equality for women.