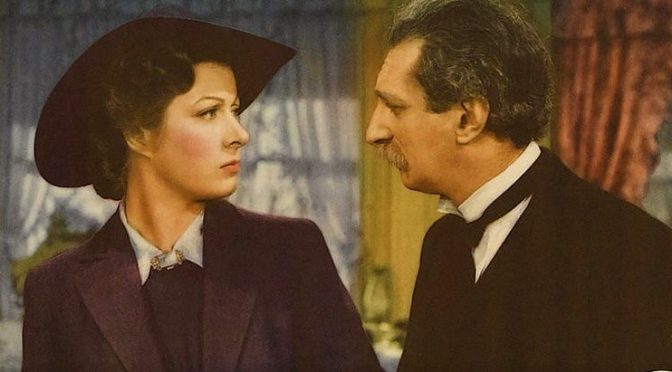 A highly unusual movie for its time, Blossoms in the Dust is about adoption, a cause that Edna Gladney championed with passion throughout her life. Born in 1886, Edna Gladney was a real women who made it her life’s mission to fight for each and every orphan that crossed her path. Indeed, she surely must have bonded with children she helped, yet she never adopted a child herself. Among her accomplishments, the word “illegitimate” was removed from official records when “that Gladney woman,” as Edna became known, lobbied the Texas Legislature long and hard to pass a bill that gave adoptive children the same rights as their biological counterparts. Even so, movies that revolved around social causes were unheard of in the 1940’s; and it took the personal experience of an MGM Studio executive to promote the idea.

The events leading to the making of Blossoms in the Dust were set in motion when Ralph Wheelwright, an MGM Publicist, and his wife adopted a baby from the Gladney adoption agency. So inspired by Edna Gladney’s advocating for homeless children, Wheelwright sketched Gladney’s life story for the screen, then presented it to the President of MGM Studios, Louis Meyer. The manuscript was well received and Wheelwright was $10,000 richer for the rights. However, this was not a time when women fought for equal pay, so Edna most likely did not complain about the mere $5,000 she was paid to have her life portrayed in a motion picture. Admirably, she donated every cent to her personal cause—her Gladney home for orphaned children.

Being illegitimate herself, Edna avoided the stigma when her stepfather took her as his own and gave her his name Kaley. However fortunate Edna was to escape the downtrodden, she kept their plight close to heart. As a child, she welcomed vagrants into her house to care for them. One particular boy had the honor of bathing and grooming in a new tin bathtub, infuriating Edna’s grandmother.

Wheelwright, privy to the fact of Edna’s illegitimacy, gave that role to her sister Dorothy, who was Edna’s maternal half-sister in real life.  Edna and Dorothy enjoyed a stable childhood in Wisconsin, which ended with their father died. An extended trip to Texas to visit relatives turned into a permanent one when Edna Kaley met Sam Gladney. As in the movie, a Wisconsin fiancé was left jilted by these fateful love birds.

Following their wedding, The Gladney Milling Company in Sherman, Texas (home of Gladiola Flour), along with community involvement, kept the childless couple busy. An unfortunate tubal pregnancy had left Edna infertile; thus, she was able to dedicate her energy and time to crusading for the Sherman Civic League.

Her efforts to work for the greater good through the Civic League fatefully led her to an inspection of the “Grayson County Poor Farm,” where Edna was exposed to what was truly a dumping ground for unwanted, poor, insane, and handicapped children. She and other Civic League ladies personally cleaned up the farm and arranged for the children to be transferred to the Texas Children’s Home and Aid Society in Fort Worth. The children’s home was run by Reverend I.Z.T. Morris (roughly represented by character Dr. Max Breslar in the movie) and his wife, Belle.

A side note about Rev. Morris: “I.Z.T.” was named as such since he was number 13 in a family, which must have resembled that of “The Old Woman Who lived in a Shoe.” Having run out of names, his mother called him simply “Bud.”  Upon coming of age, leaving home, and joining the Army, Bud needed an official name. He named himself, Isaac (from the Bible) and Zachary Taylor (President of the U.S. at the time). Hence his name, I.Z.T. Morris. He was also known as the “Basket Man,” since he often traveled by train with a baby in a basket. Edna Gladney basically took up his work, and then took it even further.

Edna’s involvement only got deeper when she joined the Board of Directors for the Texas Children’s Home and Aid Society. This Texas mover and shaker utilized her new position to establish a day nursery in Sherman, a relatively new concept at the time, to help poor working families. Sam Gladney’s death in 1935 left Edna bereft after approximately 30 years of marriage, but she continued forward in making a positive difference in the lives of orphans in Fort Worth.

Fort Worth was the end of the line for orphans still aboard the orphan trains from the northeast when the last whistle blew. Stronger children were selected along the route for work projects. The weakest remaining got something better: rescue and permanent placement with a caring family in Texas (“Gladney Fun Facts | Adoptions by Gladney,” 1984).

Official recognition for her work came when the Texas Children’s Home and Aid Society bought the West Texas Maternity Hospital, and renamed the complex The Edna Gladney Home—now The Gladney Center for Adoption. In 1960, when she was 74 years old, “that Gladney woman” with boundless energy, vim and vigor, was forced into semi-retirement for health reasons and she died the following year.

Gladney’s was an inspiring life for sure, but without enough drama to entice an audience, thus, a problem for Blossoms in the Dust’s screenwriter, Anita Loos. After much thought, Anita was about to give up when the idea of a crippled character named Tony suddenly occurred to her while sleeping. Every movie needs a conflict or a moral dilemma, and more than one storyline for the hero/heroine. Tony’s story provided these handily. Another storyline in the movie involves an unscrupulous birth parent, which was based on a true-life case involving Edna and a birth mother.

Movie connoisseurs should be familiar with Walter Pigeon and Greer Garson, the stars who played Sam and Edna Gladney. Also notable, but not as well-known is Theresa Harris, the African-American actress who is cast as Cleo. Harris, who was quite multi-talented, often played the role of a domestic worker in Hollywood movies in the early to mid-20th century (Johnson, 1952; Wells, 2011).

During that era, opportunities were limited for actors to be employed and to succeed in the movie studios, and a greater challenge, in particular, for any woman, black or white, to earn a living apart from traditional female-oriented jobs (waitress, nurse, maid, teacher, secretary, and the like). Thus, it is remarkable that Theresa Harris, who also hails from Texas, “appeared with more stars of the Golden Era of Hollywood than anyone else” (“Theresa Harris,” 1990).

Theresa Harris was perhaps the hardest-working woman in Hollywood, appearing in close to 90 films, working at every major studio with most of the big stars. She was respected by studio executives, producers, directors, and co-workers alike, who sometimes went out of their way to get her more lines and screen time. Harris married a doctor and retired from the movies in the late 1950s, living comfortably after having carefully invested the money she made during her career in the movies.

As a note of acknowledgement, especially since the movie, Gone with the Wind, is mostly forgiven for its similar domestic-worker roles for African American actors, it is appropriate to shed light on the real lives of domestic workers for a younger generation. Like employees in all kinds of jobs, many domestic workers who fulfilled the roles of devoted servants to families (as Harris played in this movie) had sharp minds, families of their own, and personal lives with meaning beyond the families they served.

In the story of Blossoms in the Dust, the screenwriter added characters and events that didn’t exist in Gladney’s life. Her son, his death, the sister’s suicide, and the disabled “Tony” were all fictionalizations. Despite these embellishments, the story of Edna Gladney is worth forever preserving on screen to celebrate all the good that she did. Learning about her surely makes all of our lives better as we begin the New Year with hopes that it will get even better.