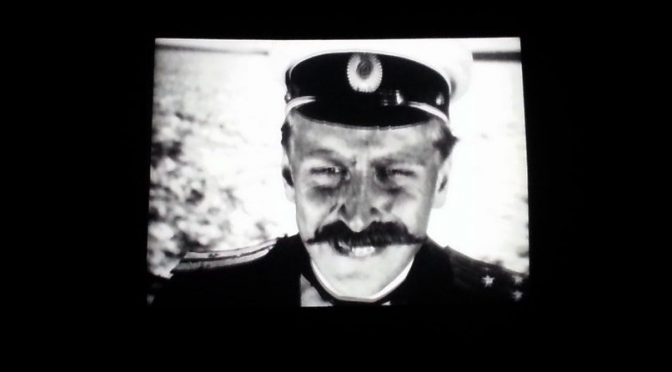 Now and then, we must re-visit our history to know what we’ve gained in our progression of movie-watching. When we began our film exploration in January 2010, it was simply that, an exploration. However, even then, we looked at films that revealed important ways in which the movie and the spectator interact to build their stories and to reveal their biases.

Since then, that exploration has evolved into a somewhat more systematic treatment of our focus of study. Through the use of themes and the occasional “film on film,” we are developing a better vocabulary for talking about our movies, and a better understanding of various aspects of film communication.

We now have a film glossary online as a source of reference for terms. These terms are helpful for describing theoretical, political, and technical material and concepts that have impinged upon  developing the medium over the years.

Later this month on Sunday, Feb. 26, we can watch the annual awards ceremony of the Academy of Motion Picture Arts and Sciences. Through these annual awards, we can understand symbolically, without any particular education or practical experience, what is valuable to the success of a film.

The awards process lifts up those movies and their constituent creators who are responsible for directing, acting, editing, cinematography, costuming, art direction, etc. As a film study group, we have now watched documentary films focused on many of these components.

Now, please bear with me just a bit while I set the context for this article about images and editing. Shortly, I will tell you how this content relates to Battleship Potemkin (1925), the genius of its director, Sergei Eisenstein, and how this film has influenced many filmmaking techniques that we take for granted today

When we watch movies, we are doing brain work. In watching movies, like other activities and human behaviors, our brains have intelligence to do some of it without our active thinking, e.g., the human ability to walk and talk and sleep and eat without having to actively engage the mental process a step at a time. Pick up the fork, spear the food, lift the hand with the fork in it, open your mouth, etc. Some of our body’s control systems are even autonomic, i.e., involuntary or unconscious, such as breathing, the heart’s pumping action, and the functioning of our eyes, so that in an emergency our survival is not impaired by our having to think about turning these systems on.

Humans can also perform amazing feats somewhat unconsciously, like Mozart playing the piano. He had an innate ability that most don’t have. This is similar to Jerry’s ability to write poetry, my ability to work with computers, and your particular ability to do something else a little better than others. Well, you might say, some of this surely comes from our environments and our experiences, a lot of practice, and developing habits.

Yes, that is undoubtedly true. The brain becomes accustomed to doing some things because, in effect, we have programmed it that way ourselves. However, our ability to watch a movie, which is in fact a series of still camera shots, takes advantage of a human autonomic system—the rate at which all of our brains process images in sequence to see these individual frames as continuous motion.

Stereopsis is another human function that usually works without intervention. This refers to our “perception of depth and 3-dimensional structure” obtained by visual information from two eyes in individuals with normally-developed binocular vision (“Stereopsis,” 2017).

Our eyes work together such that we can use contact lenses of different strengths in each of our eyes, respectively, to produce better single vision. The stereoscope in the Victorian era, and later the “View-Master,” takes advantage of this attribute to view a pair of separate images, depicting left-eye and right-eye views of the same scene, as a single three-dimensional image.

Yet another example of invisible brain work is our psychological behaviors, which can be exploited in filmmaking and in other ways to influence our thinking. In psychology is the discovery that an absolute relationship exists between particular colors and particular emotions.

We have discussed in earlier group sessions how our brains work in other ways that aren’t as easy to observe as how one perceives color. In fact, our brains can even mask what we see at points in time. Remember our discussions of “cognitive dissonance” and “selective exposure theory”?

The Kuleshov Effect in propaganda films

Lev Kuleshov was a newsreel camera man in Russia during the Revolution who, in 1919, became a co-founder of the first-ever film school, the VGIK: All Union State Institute for Cinematography, or “Moscow Film School.” The school was established in order to train students to produce newsreel films for propaganda in support of the Bolshevik party.

Its faculty members were actively engaged in investigations of both technique and theory. In his workshop, Kuleshov examined the psychological effects of juxtaposing photographs in different ways to produce different meanings, thus exploiting the ways that the human brain interprets images without any active intervention. This became known as the “Kuleshov Effect.”

Last month, our 2017 series on persuasion began with a movie, Blossoms in the Dust, that highlights the work of a persuasive woman, Edna Gladney, who was therefore, a “woman of influence.” Among other positive ways that she influenced today’s thinking, she was instrumental in getting the word “illegitimate” removed from birth certificates issued in the state of Texas. “Her bill is championed by Senator T. R. Cotton, and after she makes an impassioned plea before the Texas legislature, it passes into law” (American Film Institute, 2016).

This year marks the 100th anniversary of the October Revolution in Russia. Our featured movie this month, Battleship Potemkin, highlights another person of influence, Russian director, Sergei Eisenstein. His work impacted masses of people, most notably filmmakers and film theorists, but also millions of his fellow Russians after the October revolution.

Eisenstein was, for a short time, a student at the Moscow Film School where he learned about techniques of film editing from Kuleshov. He also learned about the work of D.W. Griffith, a US filmmaker best known for the film Birth of a Nation in 1915, which is viewed as contributing to the rise of the Ku Klux Klan ( WNET, 1998).

The following 14-minute video, entitled The History of Cutting – The Soviet Theory of Montage, shows more about Eisenstein and his theories (Hess & Filmmaker IQ, 2014).

For Eisenstein, the basis of every art is a dialectical conflict, “an ‘imagist’ transformation of the dialectical principle,” dynamically yielding new concepts in the form of a constantly developing argument of opposites.

In the realm of art this dialectic principle of dynamics is embodied in conflict as the fundamental principle for the existence of every work and art form.

The effectiveness of a work of art is built on a dual unity: the penetration of sensual thinking into consciousness by means of the structure of the form (Thompson, 2002, Notes from Eisenstein, S. 1935. “Film Form, New Problems”).

Take a look at the following 6-minute video that illustrates Kuleshov’s and Eisenstein’s contributions to film theory (One Hundred Years of Cinema, 2016). While, by its nature this video duplicates content from the earlier video, it adds to and possibly reinforces the essential take-away knowledge.

Dialectic is a way of thinking where contradiction is considered a starting point and not a possible anomaly in arriving at the “truth,” a beginning and not an end to discussion or contemplation. In contrast to a logic of “proof” through empirical observation, “dialectic is the medium to help us comprehend a world that is racked by paradox” (O’Connor, 2003). However, along the way subjective fallacies may emerge through such thinking, such as the opposing views of Marx, who focused on materialism as the driving force in the universe, and Hegel in his assumption of rationality.

The Kuleshov effect is a film editing (montage) effect demonstrated by Soviet filmmaker Lev Kuleshov in the 1910s and 1920s. It is a mental phenomenon by which viewers derive more meaning from the interaction of two sequential shots than from a single shot in isolation.

Montage is the principal contribution of Soviet film theorists to global cinema, and brought formalism to filmmaking. Eisenstein argued that montage, especially intellectual montage, is an alternative system to continuity editing. He argued that, “Montage is conflict” (dialectical), where new ideas, emerge from the collision of the montage sequence (synthesis), and where the new emerging ideas are not innate in any of the single images of the edited sequence. His new concept illustrates Marxist dialectics. Films were produced to create symbolic meaning and focused on the masses and not individuals for the most part.

Stereopsis refers to our “perception of depth and 3-dimensional structure obtained on the basis of visual information deriving from two eyes by individuals with normally-developed binocular vision” (“Stereopsis,” 2017).

American Film Institute. (2016). Blossoms in the Dust. Retrieved from https://www.afi.com/members/catalog/DetailView.aspx?s=&Movie=26626

One Hundred Years of Cinema (2016). 1925: How Sergei Eisenstein used montage to film the unfilmable. Retrieved from https://www.youtube.com/watch?v=g5WbeoP_B8E

Stereopsis (2017). In Wikipedia. Retrieved from https://en.wikipedia.org/wiki/Stereopsis

Woods, A. (2017, Jan 27). What the Russian revolution achieved and why it degenerated. Retrieved from https://www.marxist.com/what-the-russian-revolution-achieved-and-why-it-degenerated.htm