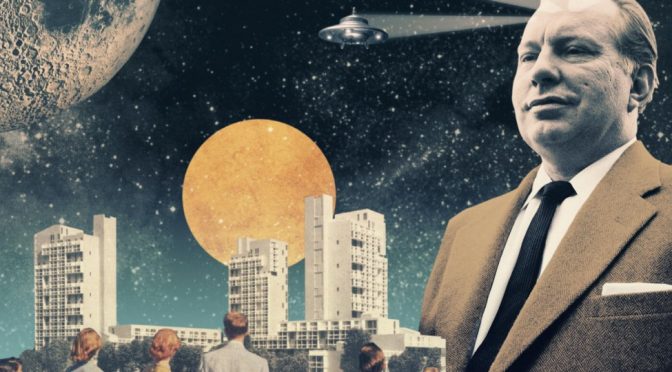 Scientology members believe that they can possess the “ultimate truth,” thus become godlike, in control of their lives, and “have it made.” According to the documentary film, Going Clear: Scientology and the Prison of Belief (Gibney, 2015), this idea is offered to members through the structures of “The Bridge,” a hierarchy of eight levels, where at each level a member strives towards the next for the sake of rising in prestige and becoming more godlike. Thus the various principles of Scientology are revealed piecemeal to members as they reach one level and move on to the next.

Principles include Scientology’s “Operating Thetans” and the story of creation (aliens from the Planet Xenu were dropped into Earth’s volcanoes by spacecraft many millions of years ago), along with other axioms of Scientology that may be challenging to a rational mind. A South Park episode tells this best (“What Scientologist [sic] actually believe,” 2005, Nov 16). Scientology schools conveniently do not teach geology or other sciences lest inquiring minds of young children wonder how spacecraft existed 75 million years ago.

The Internet makes indoctrination of new members more difficult for Scientologists, thus the church restricts its access within their communities. A Scientologist, Michael Pattinson, was experiencing doubts, but did not wish to make them known. When a health scare required his hospitalization, thus freeing him from the immediate boundaries of Scientology, he managed to access the Internet and was overwhelmed by the abundance of information on Scientology he found (Pattinson, 2006). The newly acquired knowledge propelled him to “blow,” a term for leaving Scientology immediately (Sessions, 2012).

Scientology is, of course, not the only religion that offers a system of ideas that are solely based on faith. For example, religious groups across the board have ideas about the fate of souls after death. Some believe that life on Earth is all there is. Christians believe in life after death in heaven, and Scientologists, among others, believe in reincarnation.

Through this concept of reincarnation, souls as spiritual beings are born into one physical body after another for eternity.

All religions are faith-based organizations and Scientology is no different. L. Ron Hubbard, founder of the Church of Scientology, said it himself:

Offering ideas to members as structures in The Bridge appears to a skeptic like dangling a carrot before a donkey. It requires members to take more and more courses to advance through each Bridge level, thus paying more money to support the church. Hence, to a non-believer, Scientologists may be observed to finance their own brainwashing.

However, exposure to the truth does not always enlighten. It appears to be human nature to avoid admitting that you have wasted a significant amount of time and resources on a hoax. After investing much of their lives believing in Mao Zedong and the Communist Party in China, well-meaning supporters could not bring themselves to condemn his Cultural Revolution that killed millions of Chinese people and destroyed major artifacts of Chinese culture (Griffiths, 2016; Chang, 1991).

Secrets of the Church of Scientology Revealed in “Auditing”

Auditing, a principal practice in Scientology, combines confession, psychoanalysis, and hypnosis that is purported to increase self-knowledge and to remove emotional barriers from the past (Sessions, 2012). The intense experience is carried out between am auditor and auditee and somewhat resembles a Freudian psychoanalysis session. The exception is that it involves an e-meter, a mechanism for measuring “clear;” and, the sessions are recorded.

The danger to the auditee in this process is that once a person’s deep dark secrets are revealed, Scientology potentially owns him. Should a disillusioned Scientologist try to leave the religion or criticize it, auditing material can come back to haunt the disgruntled member.

Does actor Tom Cruise genuinely believe in the doctrine of Scientology, or is he beholden to its management for safeguarding his privacy and enabling favors? Perhaps it is both.

The truth is persistent, thus it is easy to believe reports that the numbers of members are dwindling, even though the church says it is growing (Friedland, 2015). However, there may always be those who refuse to pull back the curtain and see the wizard for who he is. Thus, Scientology and other cults will continue to threaten the well-being of vulnerable persons.

A principal goal to Scientologists is to achieve a state of clear via the auditing process, designed to remove negative influence from past experiences.

A cult is a system of religious beliefs and rituals, also its body of adherents; a religion regarded as unorthodox or spurious, e.g., the voodoo cult, a satanic cult.

Church of Scientology. (2017a). What is the Sea Organization? Retrieved from https://www.scientology.org/faq/church-management/what-is-the-sea-organization.html

Church of Scientology. (2017b). Is it true that people in the Sea Org sign a billion-year contract? Retrieved from https://www.scientology.org/faq/church-management/is-it-true-that-people-in-the-sea-org-sign-a-billion-year-contract.html