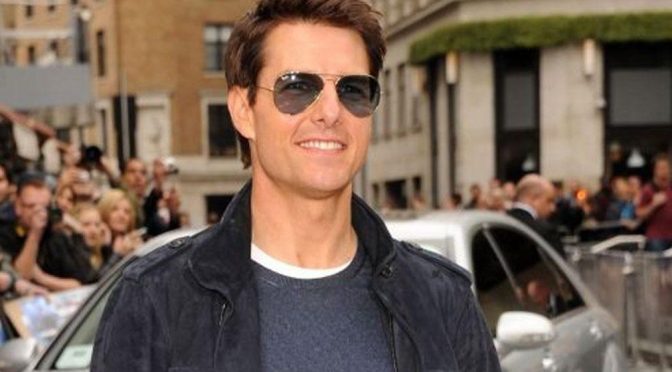 To my knowledge, I know no one personally, or even by second or third degree, who is a member of the Church of Scientology. Therefore, I begin with this disclaimer: my knowledge of the religion of Scientology stems from only secondary sources. Examples:

The only thing most people know about Scientology is that Tom Cruise is a member.

Thus, I am hard-pressed to complete this assignment to write about positive aspects of the religion of Scientology, apart from what I wrote about it in September 2016. Last year, Movies on My Mind magazine screened and critiqued Steven Soderbergh’s Side Effects (Soderbergh, 2013), about which I wrote in “Side Effects of Civilizing” (Reed, 2016, Sep 9),

It is well known that Tom Cruise is intense and controlling, and I believe he found an unusual form of a higher power to channel his tendencies. Consider Tom Cruise’s career and the fabulous shape he is in after four decades n the movie business. Putting his bizarre behavior aside, that is remarkable. If Tom Cruise needed the structure of Scientology to achieve that, then so be it (Huddleston, 2016).

However, recent news coverage of Scientology is distressing and makes this directive more challenging: “Scientology facilities have been closed after a man alleged he was held against his will” (Wittmer, 2017, May 5). Actress and former Scientologist Leah Remini has made her criticisms of Scientology public via a TV series that runs nightly on A&E network (Remini, 2016, Nov), and, elsewhere, her strong opinion that Tom Cruise is “diabolical” (Bond, 2017).

I have pondered over whether to officially retract what I wrote, or to stand by it based on my newly-expanded knowledge of Scientology.

There is no denying that Tom Cruise has a successful and high profile career. Could the foundation of Scientology have something to do with the longevity of his presence in Hollywood? It may be that Cruise genuinely believes he purged all negativity through “Auditing” sessions (Scientology’s version of psychoanalysis), and thus he enabled his optimal self in the movie business. Scientology returns the favor of his support by accommodating him and fiercely protecting his privacy. Tom Cruise is the poster boy for Scientology; therefore, it is possible that he is sheltered from its dark side. The same goes for John Travolta, who appears to perceive Scientology as good luck for his career.

Going Clear: Scientology & the Prison of Belief presents a thorough overview of Scientology and its founder, L. Ron Hubbard. Testimony from former Scientologists describes how members are attracted to Scientology’s system of beliefs, which enables the audience to put aside the incredulity that people can be that easy to manipulate.

For sure, members join via a whole host of factors: Some were born into it and know of no other way; some were attracted for a range of reasons—a weak family background, a new and exciting adventure into spirituality, disenchantment with mainstream religions, a tightly-contained and controlled way of life. Further, some surely find irresistible the individual attention that comes with auditing.

At a neighborhood event, someone asked Andrea, “How do people fall for Scientology?” She promptly replied, “In the same way you do,” meaning Scientologists believe and invest in their doctrine as do Christians, Jews, Muslims, and many other organized religions.

The publication in 2003 of the mystery/detective novel, The DaVinci Code by Dan Brown, confounded many in the Catholic Church. Adult education classes were filled to standing-room-only with people demanding answers for “the truth” behind the Catholic Church. They wanted to know if they had been brainwashed into believing Jesus Christ’s divinity. The leaders of these classes were unprepared for the challenging questions that arose from the book. The page-turner challenged people’s faith in Catholicism and was especially bad timing with the sex abuse scandal making headlines (Lawton, 2006).

Since then, the furious storm over The Da Vinci Code has died down as readers moved on to other riveting page-turners such as Dan Brown’s other book, Angels and Demons (2000). The Catholic Church, which has wavered through its share of controversy, is still standing strong while The Da Vinci Code is a distant memory. The majority of Catholics appear to have returned to their comfort zones,  attending Mass and taking the Eucharist.

Can Scientology overcome its reputation?

Can Scientology overcome its reputation as a manipulative, brainwashing and evil cult?

Organized communities, from religions to political parties, rely on the passion and loyalty of their followers. Each organized community has its stubborn, yet well-meaning, devotees, who turn their heads when scandal breaks out. We all do this to an extent.

Democrats waved off President Bill Clinton’s liaisons with women who were not his wife. They also brushed off Hillary Clinton’s careless handling of Benghazi and government emails.

On the other hand, Republicans shrugged their shoulders when Donald Trump did not release his taxes, and glossed over a certain leaked tape of a lewd conversation with Access Hollywood’s Billy Bush (Phillip, 2016, Oct 7).

Now, reacting to a much more serious problem than what’s in a novel, some Catholics would rather not face the evils that their church has perpetrated on thousands of young children. Thus, a thriller novel claiming that Jesus Christ married Mary Magdalene who bore his child is certainly not going to sway these same Catholics. Scientology surely has its undiscerning followers who will not be swayed by truth when it is rubbed in their faces.

Most spot a manipulative, brainwashing, and evil cult when they see it. Overwhelming evidence against Scientology is easily accessible on the Internet. The Church attempts to keep their followers in a bubble, but there is no stopping the truth once it starts spreading. It remains to be seen whether Scientology will adjust and survive, or dismantle.

As for the Catholic Church, it adjusted and is thriving under the leadership of Pope Francis, who is enormously popular around the world. The Catholic Church is thriving also because its members number in the billions, which is an astronomical number of people who have chosen to be Catholics. In addition, starting with Pope John Paul, the Catholic Church has been apologizing for its past injustices. [On a side note – Pope John Paul went on a well-publicized tour of apology on behalf of Catholic Church, leading Oscar host Billy Crystal to quip in the 72nd Oscar Ceremonies: “This just in: The Pope has just apologized for Deuce Bigalow, Male Gigolo” (EW Staff, 2000, Apr 7), a much ballyhoo’ed comedy of 2000.]

Pope Francis has given heartfelt apologies for the sex scandals. (Yardley & Neuman, 2015, Jul 9; Povoledo, E. , 2015, Oct 14). As expected, some were not satisfied with this apology and felt it rang hollow. However, at the very least, and different from the Church of Scientology, the highest authority of the Catholic Church is acknowledging wrongdoing, and is directing changes to be made to help protect young children.

Compared to constraints on members of the Church of Scientology, the parishioners of Catholic churches come and go as they are inclined. Those who worship only at Christmas and Easter are not condemned. Priests and Deacons spread the Word of God without forcing people to pay to hear the Gospels according to Matthew, Mark, Luke and John. While the clergy strongly encourages tithing, blessings are not withheld for those without the means.

Reconciliation or Confession is between the priest, the confessee, and God, and no permanent records are kept. Further, Catholic churches do not hold people against their will.

Some members criticize the culture of self-guilt that they experience in the Catholic Church. The reality is there is much freedom in being a Catholic because it is ultimately the individual’s choice whether to attend Mass every week or not, to go to Confession, and marry in or out of the church. Compare the dwindling numbers of Scientology with the growing of the Catholic Church (Dower, 2017). That tells you something.

Finding the Positive in Scientology

For me to see the positive in Scientology, many layers need to be peeled off–the bizarre worship of L. Ron Hubbard, the uncompromising demand that Scientologists disconnect from those family and friends who do not support the religion and are thus known as “Suppressive Persons,” the bewildering terminology of thetans, auditing e-Meters, and engrams, the baffling Sea Org and the Cadets that feed into it, the Hole at Gold Base which is the location of alleged abuse, the act of contracting yourself to Scientology for a billion years, along with believing that humans carry remains of aliens from the planet Xenu.

I put myself at risk of being tormented by a squad of “Squirrel Busters” to state that Scientology appears to be based on intimidation, manipulation, and fear.  Yet, take away all of the above and achieve a state of “Clear” (purging negative thoughts to achieve maximum potential), Scientology may not be such a bad thing after all.

Phillip, A. (2016, Oct 7). Republicans rush to condemn Trump — and distance themselves — after lewd video of Trump emerges. The Washington Post. Retrieved from https://www.washingtonpost.com/news/post-politics/wp/2016/10/07/republicans-rush-to-condemn-trump-and-distance-themselves-after-lewd-video-of-trump-emerges/

Wittmer, C. (2017, May 5 ). Scientology facilities have been closed after a man alleged he was held against his will. Business Insider. Retrieved from https://https://www.businessinsider.com/scientology-facilities-in-tennessee-closed-2017-5.