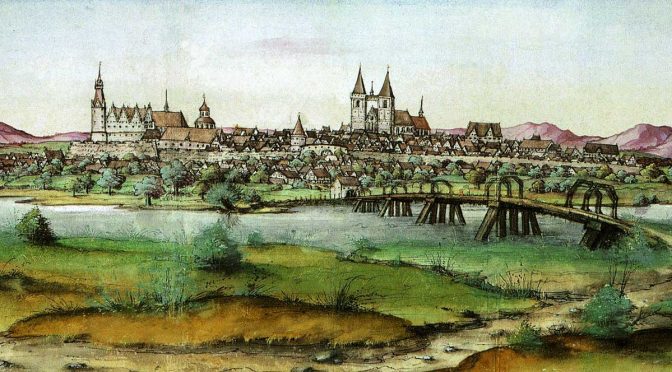 On what I imagine to be a breezy autumn day in the year 1517 in the quaint town of Wittenberg, Germany, Martin Luther walked up to a chapel with a hammer, some nails and placards. Once he had posted the “95 Theses” for all to see, he surely pondered the consequences of his boldness as he walked back home. Settling in at his humble abode, he must have felt increasing confidence for he proceeded to write more papers to express his beliefs that the Catholic church was corrupt.

Meanwhile,  Luther may have gone about his daily life with no inkling that his criticism of the church was creating such a buzz that, within a matter of weeks, his message would roar into each village, town, and city in Christian Europe. Considering that this was the 16th century, the speed at which Luther’s message spread is no less astounding than the instantaneous sending and receiving of text messages today.

What enables a message to “go viral”? Social media! Existing since the dawn of man, social media are methods of exchanging information that bypass official news sources. Different forms of social media have emerged over the course of history. Today, our social media include Facebook, Instagram, Twitter, SnapChat, countless other apps, and, can we include independent films?

An article in The Economist, entitled “How Luther went viral” (2011, Dec 17), describes the means of dissemination of Luther’s writing and relates its power at the time to send messages quickly to far away places. In 1450, social media certainly received a boost when Johannes Gutenberg invented the printing press. This new technology enabled Luther’s friends to distribute his pamphlets in German, a language that the common folk could read and understand, as opposed to Latin, the church’s official language. Luther’s call for church reform circulated through other cultural media as well, e.g., through ballads and woodwork (Ibid.). Were it not for the social media of Luther’s time, his message might have stayed within the intellectual circles of Germany and not spread beyond.

For many Americans today, religious practice is an important aspect of  their lives, and which has little connection with  the government of the nation. However, in 16th century Europe, religion, specifically the Catholic church, was heavily intertwined with government, power, and politics. Therefore, Luther exposing abuses within the church threw many European communities for a loop. Much anguish arose over whether to remain loyal to the church or to follow John Calvin and other leaders in protest.

Ultimately Europe became divided as Catholics and Protestants clashed—brother against brother, nation against nation—leading to the Thirty Years’ War (History.com Staff, 2009). Such is the influence of social media use that it can play a role in churning the winds of war.

Social Media Use and Football

Like the 16th century Europeans,  fans of America’s National Football League (NFL) face an especially difficult decision. A large population of Americans are torn between challenging an established institution they feel is flawed and standing by what they have always known.

Some fans plan to join an NFL boycott on Veteran’s Day 2017 that calls for a halt to viewing of NFL games and to purchasing NFL products. Reportedly, tens of thousands  of fans became interested after learning of it through friends, golfing groups, email, Facebook, and many other forms of social media (“NFL Boycott Declared,” 2017, Sep 27). This plan holds out the promise to cripple the billion-dollar business that is the NFL (Ozanian, 2016, Oct 5).

Football is as American as “mom, apple pie, and baseball,” and some say it’s a religion (Barton, 2017, Sep 27).  In fact, in South Carolina, Presbyterian College offers a course for its students entitled, “Religion of SEC Football” (Porter, 2016, Aug 21).  From Friday night lights to Saturday’s tailgating to NFL Sundays, football is integral to American culture. Passionate fans with football in their blood pass their fandom down through generations. Over beer and comfort food (chips n’ dip, popcorn, chicken wings, pizza), family, friends, neighbors, and colleagues gather alongside complete strangers in stadiums, homes, bars, and tailgating parties in parking lots, in airports, camping grounds, hotel lobbies, and wherever there is a screen or radio to cheer, boo, and enjoy games together. This elicits bonding, good memories, and a guaranteed good time.

Americans’ love for football made the sport into a national pastime. Demand for football in the past has been so big that, in order to help fans get from one weekend to the next during the season, in 1970 the NFL added “Monday Night Football” to the TV lineup and, following more recently, “Thursday Night Football” in 2006. The NFL Pro Football Hall of Fame in Ohio and the  College Football Hall of Fame in Georgia are popular destinations.

Then one day in 2016, the San Francisco 49’ers quarterback, Colin Keapernick, took a knee. Keapernick kneeled during playing of the US national anthem in protest against racial injustice. Then Pandora’s Box opened, social media went wild, and there was no containing the political ramifications.

Until Keapernick’s action, politics had mercifully stayed away from football. At times of political strife in America, the NFL had been the bastion that unified, as players, coaches, owners, and fans stood together for America. Keapernick’s protest in the midst of a politically-divided nation shocked fans—some have condemned and some applauded (McCarthy, 2016, Oct 5). However, with this exhibition of activism, the NFL has now joined Hollywood on the platform from where political and moral superiority is imposed. Politics may have tarnished the altar of football such that going back isn’t possible. (Note: Before the NFL is greatly diminished, or it all goes away, can the Atlanta Falcons please, just please, win a Super Bowl for its loyal fans who have been rooting for them since 1966?)

When an institution becomes so large and powerful, it can lose touch with the people it serves. In the 1500’s and still today, social media remain useful tools in these situations. In September 2017, Movies on My Mind screened Going Clear: Scientology and the Prison of Belief and discussed the overwhelming evidence of Scientology’s sinister ways that exists in social media. It was hardly surprising to learn that Scientology’s numbers reportedly are dwindling (Friedland, 2015). Such is the persistence of people to continue beating the drum.

New technologies most certainly give social media more outlets than ever before. With 1.94 billion Facebook users (Fiegerman, 2017), the people have taken the advantage! Unfortunately, the rise of “fake news” threatens its continued popularity. Scams are so abundant that newer channels and innovative methods must emerge to disseminate information with greater validity. Whatever forms social media take in future generations, they will simply be different ways for people to connect with one another to change the world—just as Martin Luther did with a hammer and some nails.

Arnold, J. L. (1999, Mar 8-14). The Cause and result of the Reformation: Reformation men and theology. Lesson 2 of 11. Third Millennium Ministries. Retrieved from https://old.thirdmill.org/newfiles/jac_arnold/CH.Arnold.RMT.2.html

Barton, T. (2017, Sep 27). Football really is America’s religion. That’s what made the NFL protests so powerful. Retrieved from https://www.vox.com/identities/2017/9/27/16308792/football-america-religion-nfl-protests-powerful

Head, S. (2017). Reformation or Revolution? Standing on my Head. Retrieved from https://www.patheos.com/blogs/standingonmyhead/2017/04/reformation-or-revolution-2.html

Martin Luther and Bp. Barron: There’s no such thing as one cockroach. (2017, Jun 28). Retrieved from https://www.churchmilitant.com/video/episode/vortex-martin-luther-bishop-barron

Porter, K. (2016, Aug 21). You can now take a “Religion of SEC Football” class and earn college credit: Presbyterian College in South Carolina is taking advantage of our love for SEC football. CBS SPORTS. Retrieved from https://www.cbssports.com/college-football/news/you-can-now-take-a-religion-of-sec-football-class-and-earn-college-credit/