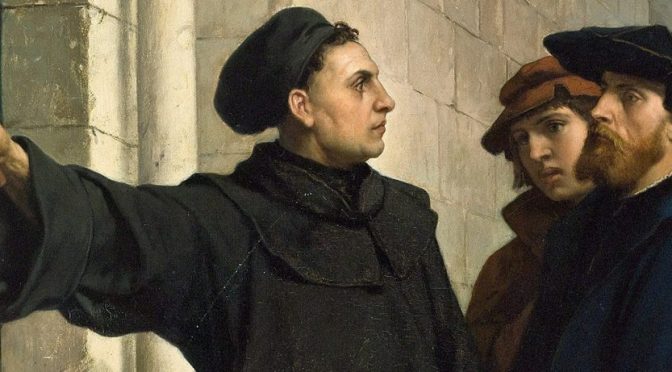 This event was a metaphoric earthquake waiting to happen. From medieval times (5th-15th century), the formidable Catholic Church dominated Europe and by Luther’s time (1483-1546) was steeped in corruption, which included the selling of indulgences to absolve parishioner’s sins. Rome’s magnificent St. Peter’s Basilica was built on funds raised from such practices (Justice, 2011).

The Fates were patiently waiting for someone brave to come along and openly confront the all-powerful Roman Catholic Church. Answering the call was a learned German priest of humble background. Martin Luther is considered by Biography Online as one among many—including Jesus Christ—who persuasively and singlehandedly changed the world for the better (Pettinger, 2014, Aug 3). Yet, some are not so positive about the “last Medieval man, and the first modern one” (Marty, 1993).

Among them is Catholic priest Father Dwight Longenecker, who shares his interesting insight in an essay, “Revolution or Reformation,” on his website (Longenecker, 2017).

Father Longenecker acknowledges that his church was corrupt in the 16th century, but insists that what was needed was renewal from within rather than an outright revolution. He believes that the Reformation, which resulted in the Thirty Years’ War (a conflict between Catholics and Protestants that lasted from 1618 to 1682), set the precedence for schisms among nations and every subsequent war up to the Second World War (1940 to 1944).

When the Catholic Church’s supreme authority over Europe was challenged, fighting among nations erupted across Europe. As Longenecker states,

Most importantly, the Protestant revolution established a precedent in Europe. The precedent was that revolution was a way to accomplish one’s religious and political aims. Furthermore, before Luther’s revolt the nation-states of Europe were united in loyalty to an overarching moral authority–the authority of their shared Catholic religion. Luther shattered that. Instead nation-states developed and the rivalry of national powers ushered in not just the Thirty Years’ War, but established the national rivalries that would plunge Europe into war after war after war–culminating in the First and Second World Wars.

What Was the Legacy of Henry VIII’s Revolt?

Shall we turn to England? What was the legacy of Henry VIII’s revolution? An entire social order was overturned. Monasteries and parish churches were stripped of their property. Monks and nuns were murdered in the streets. The King (and later his murderous daughter Elizabeth) consolidated their power and wealth by demolishing an established order. When the monasteries were closed, the funding for the many poor houses, hospitals, orphanages and old people’s home dried up; and the poor were thrown into the street.

Longenecker makes no mention of another daughter of the same King. In the name of Catholicism, Queen Mary I declared approximately 300 Protestants as heretics and had them burned at the stake. However, Longenecker cannot be blamed for conveniently leaving out “Bloody Mary,” as she has no place in his argument that Protestants were a key contributor to violence at the time.

Father Longenecker does recognize that much of historical knowledge is based on who controls the narrative. Thus, he would encourage research of differing versions of the same event, and does not shy from recommending resources that support his beliefs.

. . . what took place in England in the sixteenth century was very different than the history we are usually given in which,

‘Well now there were some monks back then who were fat and jolly, and good old King Henry came along and cleaned things up. Most English people were just ignorant Catholics and then we gave them the Bible to read and they all lived happily ever after’.

Of course I realize my reading of history is biased, but so is the opposite reading of history that would make us believe that the Protestant Revolution was no more than a gentle working of the Holy Spirit to prune back his church and bring spiritual renewal and reform to his people. That is just as much a biased and blind reading of the events as mine may be.

Commemorating the 500th anniversary are celebrations galore. Enter “Reformation 500” on Facebook and an endless list of pages result with worldwide events. A five-second glance revealed a conference in New Zealand, commemoration in the Philippines, a celebration in Nebraska, concerts in Germany, and festivals in Texas, Wisconsin, and all over America, then the world. That quick glance was not even a scratch on the surface of what all is happening to recognize the 500th Anniversary of the Reformation. Movies on My Mind is having its own observation with a screening of the movie Martin Luther, directed by Irving Pichel (1993).

Etsy and Pinterest are in on the action with a staggering amount of Reformation-themed items that range from coffee mugs to blankets. Numerous travel packages including cruises are offered for tourists to visit sites in Germany that are associated with Martin Luther and the Reformation.

Considering the sheer volume of planned celebrations, it is my personal estimation that over 1 billion people extol the echoes of Martin Luther’s hammer. Astronomical is the quantity of people united today in revering Martin Luther and his influence on Christianity. Joining them are enthusiastic Catholics who now have much in common with their Protestant counterparts–except for one Catholic who assured us that he will not be joining the worldwide anniversary party.

Quote Father Longenecker, “You can include me out.”