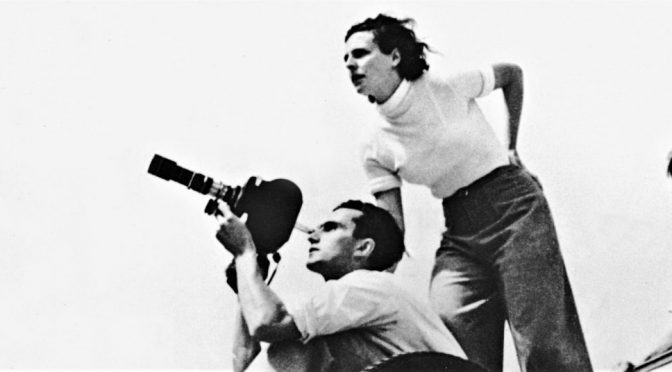 Let’s say, just for fun, that the history of film is one big party. Each guest brings a gift to the guest of honor—film in this instance—and helps it to grow in technology and influence. Among the earlier “guests” who had arrived in the 1920’s was Sergei Eisenstein, who contributed Montage. If you remember from our articles on Eisenstein, montage is a film editing technique in which a series of images are edited into a sequence that employs the Kuleshov effect.

Not long after Eisenstein’s gift, Technicolor was offered in the next decade, the 1930s. In the Golden Age of Hollywood (1930s and 1940s), Walt Disney presented the first animated feature in Snow White and the Seven Dwarfs (Hand, 1937). Around that time, a notable new guest arrived, Leni Riefenstahl, who presented her masterpiece of propaganda and within it a number of gifts of technological advancement in photography and editing.

When rising in power, Adolf Hitler believed that the masses needed more than just a leader. They needed a myth, and he, Hitler, must be that myth. Since Hitler believed film to be a powerful tool for creating and spreading myth, he needed a film director who could present him as a god. Answering the call was Leni Riefenstahl, an accomplished woman with many talents—swimming, acting, dancing, screenwriting, editing and directing. Her skills plus her Aryan looks granted Hitler’s approval, thus the project was green-lighted.

Riefenstahl’s Triumph of the Will the Greatest Propaganda Film

Her gift of Triumph of the Will was released in 1935, considered the greatest propaganda film ever made. Riefenstahl, an admirer of Eisenstein, brought her own gifts to film: innovative use of camera angles, creative cinematography by putting cameras on railroad tracks, aerial shots, and ingenious editing. Riefenstahl’s Triumph of the Will, an astonishing film for the ages, absolutely delighted Hitler.

Thus, she was then entrusted with the commission to direct a film documenting the 1936 Olympics in Berlin. Olympia was released in 1938 to great acclaim and continues to occupy various lists of “must-see” movies by cinema scholars and fans. As testament to her confidence and artistic vision, when filming Olympia, Leni Riefenstahl succeeded in doing something that perhaps no other single human being could get away with at the time. She openly defied Hitler.

Olympia highlights the American athlete, Jesse Owens, who dominated in the Olympic track and field competitions, earning four gold medals. This certainly did not please the Führer who wanted to see his “superior race” outperform the athletes from every other country. Hitler’s propaganda minister, Joseph Goebbels, personally appealed to Riefenstahl to take Jesse Owens out of the film. Riefenstahl ignored the Third Reich’s attempt to dictate her artistic creation, and went ahead to feature the outstanding athlete in Olympia.

Why did Riefenstahl take this enormous risk? It is speculated she had her eye on Hollywood. Thus, for this reason she may have wanted to showcase American Jesse Owens in her film. Was this action instead Riefenstahl’s private protest of Hitler’s totalitarian government, or was it Riefenstahl simply being an opportunist? The debate continues. The Jesse Owens matter is used by Riefenstahl’s supporters as evidence that her film was not intended as pure propaganda, but to express her fascination with the human body.

Tiefland (The Lowlands) (Riefenstahl, 1954) was another Riefenstahl project that proved to be expensive, complicated, and cumbersome with the filming spanning four years (1940 -1944). Gypsies were employed as extras, with Riefenstahl prevailing upon concentration camps as a source for actors in these roles. Riefenstahl may not have given the gypsies a second thought until years later.

Riefenstahl’s hallmark was denial. When Jewish homes, businesses, hospitals, schools and synagogues were destroyed on Kristallnacht in November of 1938, Riefenstahl more or less swept it under the rug and refused to acknowledge its atrocities. Her associations with Hitler and his Nazi party was bad enough, and her glib responses, callous attitude, and impenitence were inexcusable. Following the news of Kristallnacht, her presence in Hollywood was not tolerated, as producers refused to meet with her. For the rest of her life, Riefenstahl was essentially banging on the front door, begging to rejoin the party. Walt Disney did meet with her briefly, but nothing came of it. 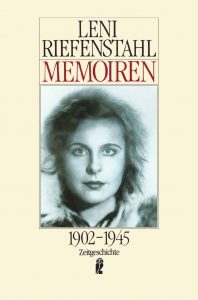 Riefenstahl’s work was never accepted in Hollywood, except for  two unremarkable films—Alone among the Nuba in 1965, and Impressions Under Water in 2002, filmed right before her death. It is a tragedy that such a rare talent was used for evil purposes. But it is possible for good to come out of evil. Leni Riefenstahl’s gifts to film did not go unappreciated. Decades later, George Lucas, helplessly impressed by her genius filmmaking of Triumph of the Will, used Riefenstahl’s ideas in 1977 when he filmed Star Wars: A New Hope, which is the second highest-grossing film in America. 1 Evidence of her influence is also seen in Why We Fight (1942), the US propaganda series by Frank Capra, who used actual footage from Riefenstahl’s films. They say imitation is the greatest form of flattery.

The films of Sergei Eisenstein, whom Riefenstahl admired, were made to promote a political cause—that of the Bolsheviks and Joseph Stalin. Stalin was just as bad if not worse than Hitler as his death toll outnumbers the Fuhrer’s by the millions. Both Eisenstein and Riefenstahl were given golden opportunities by political regimes to tap their creative geniuses and advance film technology. Where else would they have been given such liberty (and funding) to create?

Yet, did Eisenstein and Riefenstahl pause to think about the nature of what they were doing, the consequences of their work, and how they would be perceived in history? I think not. It is likely that they jumped excitedly at their chances, just rolled up their sleeves and got to work. Not unlike another artist who wants to pick up a paint brush to paint.

Did Riefenstahl ever stop to say, “What am I doing? I am promoting Adolf Hitler who is evil incarnate. I need to get away from him and get out of Germany.” No, she did not for she was immersed in her work. She was too self-absorbed to think outside of herself, hence, the hatred people feel today, even post-mortem. Since her death, an example is a posting on an online board, “I wouldn’t cross the street to spit on the bitch if she were on fire” (Eve, 2002).

On the other hand, history has been much kinder to Sergei Eisenstein, who appears to be forgiven for advertising for the Bolsheviks—the same Bolsheviks who left 30 million people dead (Trimble, 1999). The reasons for the conundrum are speculated to be:

If Riefenstahl had admitted her mistakes, would she have been forgiven? Can no one ever be redeemed for a wrongdoing? Would she have been allowed to leave the past behind and make her mark on Hollywood? On the other hand, would an apology have opened floodgates of other accusations that would have overwhelmed her for life? We will never know because Leni Riefenstahl almost never apologized for anything.

Back to our imaginary party to honor film. In recent film history, the party has been crowded with guests who outdo each other with marvelous gifts of special effects. Recently joining them are sojourners who are bringing the amazing gifts of online streaming: Netflix, Amazon Video, Hulu.  As time goes on, more callers will come knocking on the door with even more gifts that will enhance film to heights of which we have not yet dreamed.  For the sake of humanity, may all current and future filmmaking guests be guided by strong moral compasses and use their talents to help bring on a better world.

1Riefenstahl’s influence on the second highest-grossing film of all time (Robey, 2015; Levy, 2003, Percival, 2015): from Robey (2015), at the end of Star Wars A New Hope, Luke Skywalker, Han Solo and Chewbacca walk through amassed hordes of Rebel Alliance—not unlike

Hitler, Himmler and Viktor Lutze laying a wreath at the memorial for President Hindenburg, in Triumph of the Will’s equivalent sequence.

2 According to Quote Investigator (2012), “Death Was a Good Career Move” is a quote applied to the deaths of Elvis Presley, Michael Jackson and others, and attributed to a number of sources, among them Gore Vidal and “a Hollywood cynic.” https://quoteinvestigator.com/2012/08/04/good-career-move/

Percival, J. (2018, Dec 6). The Influences of Star Wars: Triumph of the Will.  A Medium Corporation. Retrieved from https://medium.com/@Jetfire852/the-influences-of-star-wars-triumph-of-the-will-9924f94d9f7