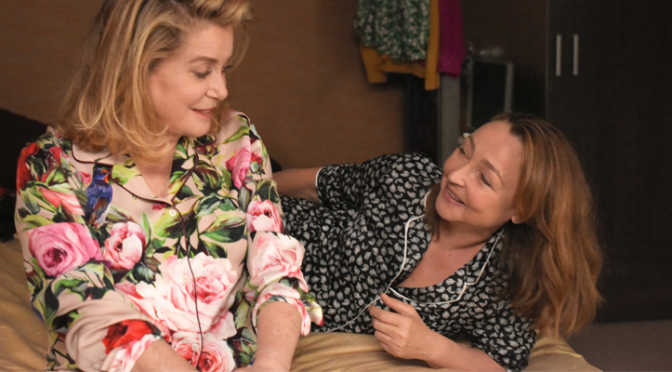 Cinema is the reflection of life. That is a fact of society. It is not just cinema. It’s like that in life.
—Catherine Deneuve, quoted by Aftab in ‘The Independent’

How ironic it is that Movies on Chatham has chosen The Midwife (2017) to promote analysis and understanding, while, according to Kaleem Aftab (2017), its French star Catherine Deneuve, suggests it’s “just a story.”

But Deneuve, who transfers to perfect English once the interview starts, dismisses any deeper reading of the movie: ‘Why does the movie have to mean something? It’s just a story of a friendship and quite an unusual encounter of two women. You just have to take the characters as they are, one is trying to accept the other one; the other one is trying to fit in, with a lot of unusual situations.’

Catherine Deneuve’s comments about The Midwife describe one of the many ways people approach watching a movie. For us, seeing this movie in the context of the “History of Medicine,” it also demonstrates a process of healing.

The timing of Movies on Chatham’s viewing is particularly auspicious for us. Within one week, on January 24, Christie’s will host a highly-anticipated auction of gowns that celebrate the life work of Catherine Denueve, who has contributed to the success of an amazing number of movies — more than 120 films at last count — in a career spanning 6 decades (Editors, The Famous People, 2017). Over that time, she was nominated for an Academy Award for best actress, has won César Awards twice for her outstanding performances (nominated fourteen times).

Deneuve’s beautiful dresses were impeccably designed by Yves Saint Laurent, who was to Deneuve what Givenchy was to Audrey Hepburn (“Antenna: The ‘Beautiful Love Affair’”, 2019). The 300-plus lots of haute couture that will go on the block reflect a decades-long friendship (1967-2008) between the actress and her beloved designer. “My most beautiful love affair is with you,” said Deneuve to Yves Saint Laurent.

Deneuve Lends Her Celebrity to Charity and Politics, Openly Criticizes the #MeTo Movement

On another front, Deneuve, who is now age 75, has kept herself socially and politically active over the years. Along with contributing to other charitable causes, her contributions under a category of medical aid (in keeping with our theme) has included the following:

Further related to politics, early last year Deneuve chimed in on America’s #MeToo movement. She made the news by unabashedly signing a public letter to the French newspaper, Le Monde, expressing her opinion that the #MeToo and its French counterpart, #Balancetonporc (“#SquealOnYourPig”), has gone way too far.

Catherine Deneuve joined more than 100 other Frenchwomen in entertainment, publishing and academic fields Tuesday in the pages of the newspaper Le Monde and on its website in arguing that the two movements, in which women and men have used social media as a forum to describe sexual misconduct, have gone too far by publicly prosecuting private experiences and have created a totalitarian climate.

While supporting the original intent, Deneuve believes that

the #MeToo movement has led to a campaign of public accusations that have placed undeserving people in the same category as sex offenders without giving them a chance to defend themselves.

So perhaps it is not surprising that the actress also supports Roman Polanski, the movie director in exile from the US, evading charges that he raped a 13-year-old girl in 1977.

. . . Ms. Deneuve defended Roman Polanski, the director who pleaded guilty in 1977 to having sex with a 13-year-old girl and who was accused by two other women of forcing himself on them when they were under age. While appearing on a French television channel, Ms. Deneuve said, ‘It’s a case that has been dealt with, it’s a case that has been judged. There have been agreements between Roman Polanski and this woman.’

However, in signing the letter to Le Monde, Deneuve received scathing criticism from feminists. Thus, in the interest of healing, and in support of those in pain, she wrote a letter of her own to explain herself (Marchand, 2018).

I salute all female victims of odious acts who may have felt aggrieved by the letter in Le Monde. It is to them and them alone that I apologize.

In her letter of clarification, Ms. Deneuve addressed criticism of her own position as a feminist. She pointed to a declaration she signed along with 343 other women in 1971, written by the feminist writer Simone de Beauvoir, in which she revealed she had had an abortion when it was still illegal. ‘I would like to say to conservatives, racists and traditionalists of all kinds who have found it strategic to support me that I am not fooled,’ she said. ‘They will have neither my gratitude nor my friendship — on the contrary.’

Still, Deneuve holds that women should have the freedom to enjoy being sexual objects without being seen as promiscuous or an accomplice of patriarchy.

In an article in Le Figaro, Bérénice Levet, philosopher and essayist, and Guillaume Bigot, Director of the French IPAG Business School, write in support (2017),

A man well brought up and who desires a woman does not tell them: ‘you’re good’, and will not, as on some U.S. campuses, to take him for the first time the hand in front of witnesses and after signing a contract in front of lawyers. . . .

What a poor idea of women and their autonomy than it is to postulate that they would be victims by nature or by destination. . . .

But the countries of the Madonna on the frescoes of the walls is the one who must refuse to choose between the mother and the whore and to accept to see in the woman a representation of otherness, equal and respectable as much as desiring and desired.

It is refreshing to see an actress speak her mind plainly, even if it means hearing that she prefers not to analyze movies! And, for contributing to our enjoyment this month through her work in The Midwife, we are most definitely grateful.

Aftab, K. (2017, Jul 4). Catherine Deneuve on new film The Midwife, her public image and how the movie industry has changed. The Independent. Retrieved from https://www.independent.co.uk/arts-entertainment/films/features/catherine-deneuve-the-midwife-martin-provost-the-umbrellas-of-cherbourg-david-bailey-a7823016.html

6 thoughts on “Catherine Deneuve on ‘The Midwife’: Don’t analyze It!”