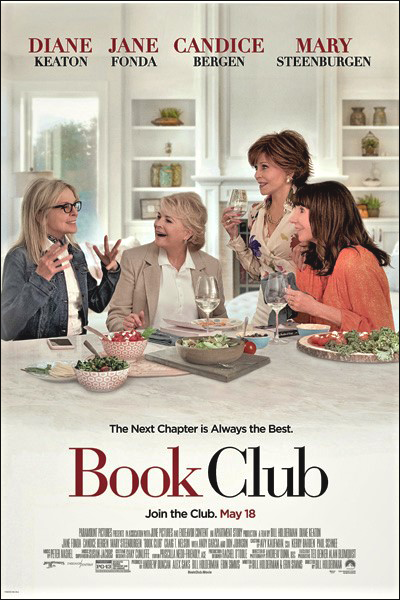 But it’s not the romances that make this film watchable, it’s the supportive relationships between the women. The dialogue is authentic — as is the high amount of alcohol consumption associated with women’s book clubs (it’s unclear how the characters were functional at their jobs after drinking so much wine).

Two of the best parts of the movie are the breathtaking California and Arizona locations and the nostalgic soundtrack, which ranges from Paul Simon and Meat Loaf to Tom Petty and Roxy Music.
—Sandie Angulo Chen, Common Sense Media

Fonda dons thigh-high ‘Klute’ boots, Steenburgen does the same tap routine that she did in her Oscar-winning role in ‘Melvin and Howard’ and Keaton’s snazzy menswear-inspired wardrobe screams Annie Hall goes granny. And kudos to cinematographer Andrew Dunn (‘Gosford Park,’ ‘The Butler’) for lighting this over-50 crowd just right. . . . in their sixties.
Steenburgen is the only one who qualifies at 65. Diane claims she was born in 1951, but Keaton herself just turned 72. Bergen is 71. And Fonda? Forget about it. At this point, her driver’s license should truthfully just say ‘timeless.’
—Susan Wloszczyna, Roger Ebert

In December, we end a series of movies under the theme of “Changing Times.” This month’s movie, Book Club (Holderman, 2018), is just meant to be fun. You can tell by the four women who have starring roles. With Holderman in his directing début, the film examines the lively lives of women who are interested in avoiding elder status.

The story shows that reading a book can change the behavior of friends who feel they are becoming “bored, middle-class women.”

Are the characters believable in Book Club? When we stop to think about the actors in this movie, I believe the very fact of their playing the roles says a lot about our changing times. What do you think?

Join us in December to watch this movie with us — if nothing else, it will give your spirits a lift in the holiday season.

Now, switching scenes, are you preparing yourself . . . for thinking critically about movies and other important life issues?
We post new insight on our films each month. New insight enhances an inquiring mind.