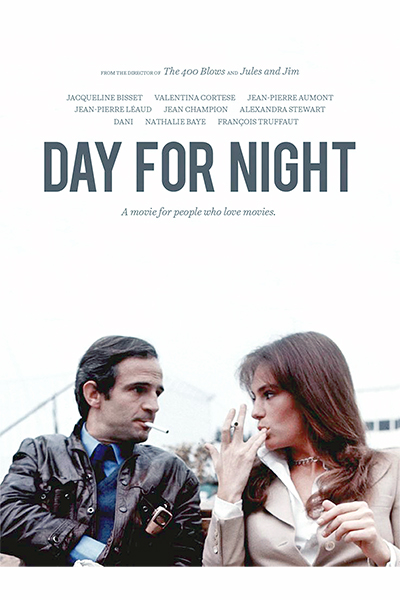 In Day for Night, his [Truffaut’s] tribute to the old way of making movies, he’s saying that he doesn’t reject the absurdities that once gave him pleasure — that they still do. . . . I don’t share Truffaut’s fond regard for the kind of moviemaking that ‘Meet Pamela’ represents. I ask for the extraordinary from films, while Truffaut, who finds moviemaking itself extraordinary, is often content to make films for everyday.
—Pauline Kael, The New Yorker

After all, it’s a film about filmmaking from a celebrated film lover; it’s hard to see how the subject could have failed to energize him. But somehow, despite our high expectations, the movie still manages to surprise us with how good it is — it’s magical, in fact.
—David Cairns, The Criterion Collection

We open our fall TECHNOLOGY theme with Day for Night (1973), a film that has received a number of awards. Among others, the movie won the Academy Award for Best Foreign Language Film in 1974.

Day for Night came from the mind of a director who was a principal in the French New Wave movement. Besides being an actor in this movie, François Truffaut was a film critic and filmmaker who worked on over twenty-five films and remains an icon of the French film industry. This is what his biographer said (“François Truffaut Biography”, 2019):

Along with Jean-Luc Godard, Truffaut was one of the most influential figures of the French New Wave, inspiring directors such as Steven Spielberg, Quentin Tarantino, Brian De Palma, Martin Scorsese, & Wes Anderson.

Movies help us understand our history and circumstances better . . . those of others as well

We hope that this movie-watching experience can expand our knowledge of the world in which we live, and therefore understand better our current communications as we receive them.

Watch this movie with us, or with your own group, to have fun while learning more about the technologies of filmmaking.

We post new insight on our films each month. New insight enhances an inquiring mind.