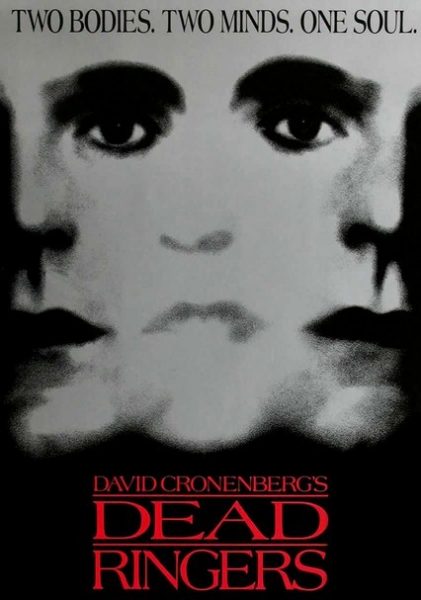 Once again, the closer he gets to “reality,” the weirder some of Cronenberg’s films seem. Dead Ringers is a rorschach blot of a split brain, with the twin characters played by Irons working out their struggle for dominance and independence.
—Russ Fischer,  /Film

Howard Shore’s refined-but-restrained score guides the camera as it lingers on hand-drawn images of scalpels and specula, hooks and forceps — the tools of medical procedures both past and present — slowly panning across crude sketches of female reproductive organs and twins in utero set against a foreboding scarlet backdrop.
—Will Perkins, Art of the Title

Dead Ringers Based on Real People

In February 2019, we add a second movie, Dead Ringers (1988), to our series under the History of Medicine theme. Its Canadian director, David Cronenberg, presents a story based on real people who died under strange circumstances. The fact that they were  identical twins—and medical doctors no less—must have struck a strong chord in Cronenberg’s imagination. He is known for his work in the body horror genre.

Don’t you wonder why certain people are drawn to horror stories while others are repelled by them? In Cronenberg’s case, maybe his family has something to do with it. His father was a journalist and his mother played the piano. As in other movies we have watched where a piano is involved, we still wonder if some may  jump logically to the conclusion that his interest in horror films relates somehow to a piano .

A novel called Twins: Dead Ringers (Wood & Geasland, 1977), a fictionalized version of the true story, was the inspiration for the movie we will see this month.

The history of medicine in our world is fascinating and worthy of contemplation. Medical advancements in our lifetimes are simply astounding. Isn’t now a good time to spread those advancements around as far as we can afford? What do you think?

Join us in February to watch this movie with us – we want you to help us understand better how movies engage our emotions.

Register your email address below, under the “subscribe” button at the bottom, to receive new insight on our films each month. New insight enhances an inquiring mind.