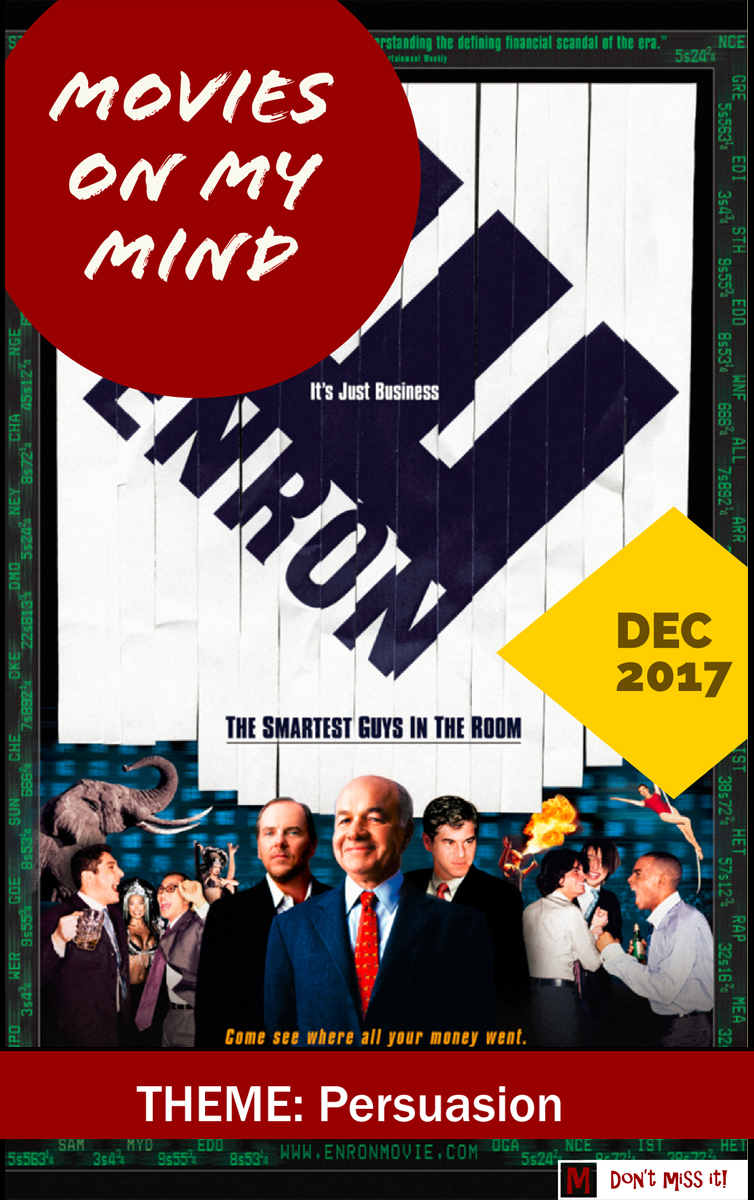 Adapted from the book: The Smartest Guys in the Room: The Amazing Rise and Scandalous Fall of Enron by Bethany McLean and Peter Elkind (2003).

Directed by Alex Gibney and Jason Kliot, and narrated by Peter Coyote, this documentary has an extensive cast of characters because of its archival footage and interviews with many well-known, newsworthy personalities.

If we believe the narrative in this movie, we can see clearly in retrospect the elements of persuasion at work that made Enron a major energy corporation, and the hottest stock on the market during its fast run up to bankruptcy.

However, isn’t it also clear that executives at both Enron and Arthur Andersen & Co were motivated by greed, and not by goals of high standards of performance? . . . not motivated to achieve excellence in management and/or to enhance the lives of stockholders who invested in the company? Where is the outrage?

All Americans Alike in Attitudes Regarding Corporate Criminals and Domestic Economy

It seems that many Americans were not outraged after the fall of Enron and their auditors, Arthur Andersen & Co. While Americans can be outraged by instances of unethical and criminal behavior of people in large organizations, their emotions are held within their beliefs about corporate America in general, and the role of government.

However, these belief systems don’t necessarily track with what the media and politicians tell us about our differences. From a Pew Foundation survey, probing differences between blue and red America, on economic issue after issue, there was convergence (Bigger than Enron, 2002). In other words, we agree on more issues than politicians want us to believe.

For example, neither liberals nor conservatives want bigger government, yet neither is likely to be hostile to government either. Further—and this is major—income is no determinant of your political leanings.

Said David Brooks of The New York Times, then writing for The Weekly Standard, to Robert Kuttner, co-founding editor of The American Prospect (Bigger than Enron, 2002),

Once upon a time the Democrats were the party of the poor and the Republicans were the party of the rich. But those days are gone forever. Income is now a terrible predictor of how a person votes. Al Gore carried many of the most affluent parts of the country . . . Al Gore even won among people who consider themselves upper class. Gore won among people with graduate and professional degrees.

Meanwhile, the Republicans are just as likely to be the party of the average person. George W. Bush won easily among white males with no more than high school degrees. These are the people whose incomes have been stagnating. These are the people for whom Gore’s ‘People versus the Powerful’ message was tailored. They are not buying it.

Brooks continues about the Enron case,

Many of my liberal friends love the Enron scandal, because they want all of America to hate the corporate elite. Their reaction reminds me a bit of the way many conservatives reacted to the Lewinsky scandal. Finally! A discreet instance that vindicates our pre-existing worldview! Now all America will hate our enemy!

The film was nominated for an Academy Award for best documentary feature in 2006. Not the only reason to watch this movie and reflect.

Our articles about the film can be found here.