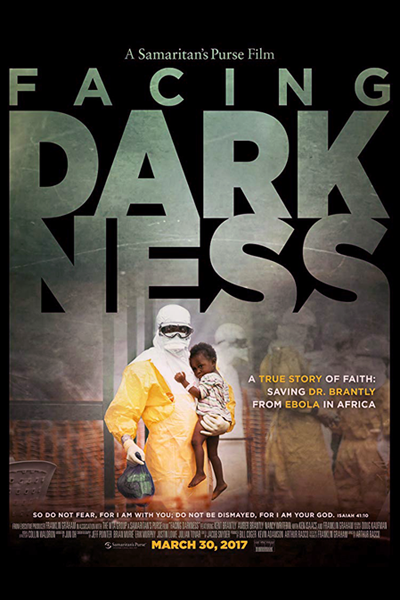 In March [2014], Doctors without Borders had launched an emergency response due to the Ebola cases that had popped up in Guinea, which borders Liberia to the north. Doctors without Borders, which is better known internationally by its French acronym of MSF (Médecins Sans Frontières), was created by French doctors in 1971 as a humanitarian organization to provide emergency medical aid around the world.
—Kent Brantly and Amber Brantly, 2016

In Liberia, Doctor’s Without Borders and Samaritan’s Purse were the only people dealing with the Ebola Crisis. They were trying to get the rest of the World to listen to the danger. In Liberia, the people, were angry. Many felt that the doctor’s had brought the epidemic to them. The people burned down the Liberian Ministry of Health. Everyone was afraid, everyone was touched by fear.
—Amazon reviewer

Facing Darkness is a Movie About Fighting Ebola

Facing Darkness (1988), our third movie in the History of Medicine series, lands all too close to home. This movie recounts the story of doctors who risked their lives to treat Ebola patients, and contracted the disease themselves.

The story ends with two members of the medical team arriving at Emory Hospital in Atlanta, where they were treated and survived to tell this story. A book, Called for life: How loving our neighbor led us into the heart of the Ebola epidemic (2015), comes first, along with other narratives that focus on different aspects of this experience (Dockterman, 2014; Woodruff Health Sciences Center, 2015).

Last month we puzzled about why certain people are drawn to horror stories while others are repelled by them? In the same way, we can wonder about what gives certain people such amazing strength in the face of high risk of death. This kind of strength is what our movie shows this month—a documentary from the organizations that sent the doctors to help.

The history of medicine in our world is fascinating and worthy of contemplation. Medical advancements in all of our lifetimes are simply astounding. Isn’t now a good time to spread those advancements around as far as we can afford? What do you think?

Join us in March to watch this movie with us – we want you to help us understand better how movies engage our emotions.

Register your email address below, under the “subscribe” button at the bottom, to receive new insight on our films each month. New insight enhances an inquiring mind.