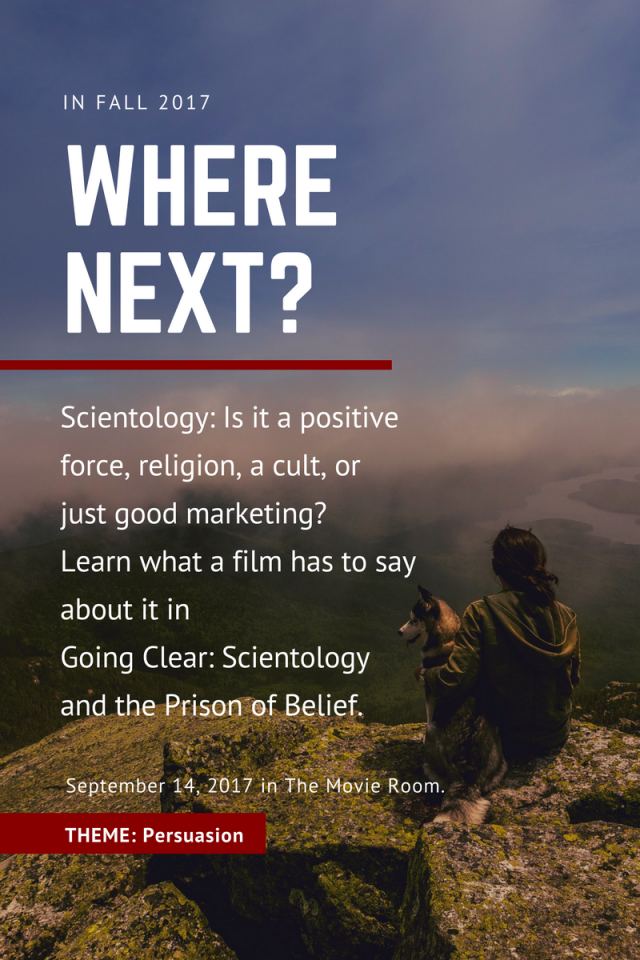 Is “going clear” one of your goals? In our fall season, we continue to explore, along with our cinefile friends and follower groups, the nature of persuasion in our midst.

Our September movie investigates Scientology, a religious organization that has persuaded numbers of people to apply their rules, principles, creeds, and codes using a method called “Dianetics.”

Applying the ideas in Dianetics, The Modern Science of Mental Health (Hubbard, 2007), Scientologists believe that a person can attain a new state of mind called “Clear.”

thousands upon thousands of people have achieved the state of Clear, a living tribute to the workability of L. Ron Hubbard’s discoveries.

“Clears” are self-confident, happy and generally successful in both careers and interpersonal relationships.

How are we to think about Scientology, a religious group that has suffered much criticism, yet appears to be expanding its presence around the world? Knowing some pros and cons of Scientology helps us understand more about the filmmakers’ intentions and perspectives as we watch it.

Will you be persuaded to join?

From our last season:

We are in the proposal stages of our new book with 300+ pages of informative content on how movies communicate. We can’t wait for you to read it!

Are you preparing yourself  . . . to think beyond the barrage of extreme and polarized opinions?

Register your email address to receive new insight on our films each month. New insight enhances an inquiring mind.