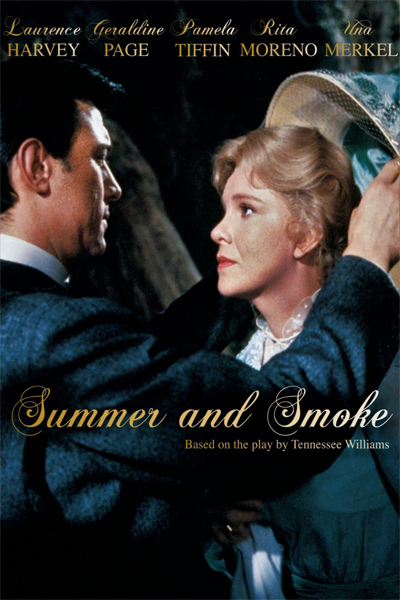 Summer and Smoke is a tragedy of failed romance. Alma’s belated appeal for love is heartbreaking; the irony is that Alma and John might have been an ideal couple. She instead joins the ranks of other fallen women in the work of Tennessee Williams.
—Glenn Erickson, DVD Savant

Summer and Smoke is an amazing work of art by Tennessee Williams – but the most amazing art is the performance of it’s star Geraldine Paige. She is absolutely luminous and magic – giving a performance which lives in the memory forever! – One of the greatest performances by an actress ever captured on film!
—Ron, Turner Classic Movies

This Fall, we begin a series of movies under the theme of “Film Favorites”. This month’s movie, Summer and Smoke (Glenville, 1961), may be a favorite because of its memorable story, or because the movie so vividly captures an era and a cultural attitude with unforeseen and unintended consequences, detrimental to a relationship that might have been so much more.

Despite its ending, this movie is an example of acting at its finest. Geraldine Page in her movie début powerfully delivers the story that Tennessee Williams intended. The film presents the life of a woman who carries a heartbreaking burden from emotional and sexual repression.

Join us in September to watch this movie with us. And before then, read Lucy’s interesting note on Elia Kazan’s Letter to Tennessee Williams.

Now, switching scenes — are you preparing yourself  .  .  .  for thinking critically about movies and other important life issues?

Register your email address below, under the “subscribe” button at the bottom, to receive new insight on our films each month.