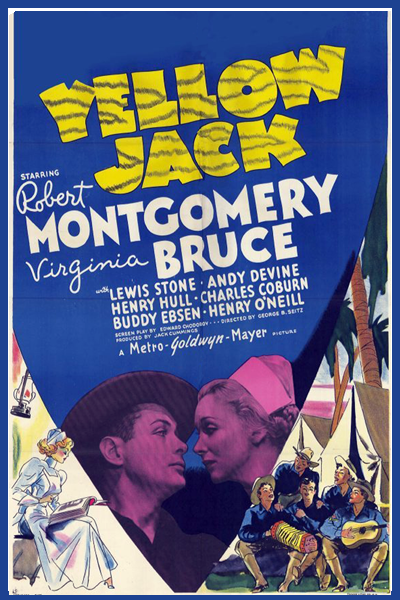 In the late nineteenth century, the understanding of disease and disease transmission made huge strides, with a number of critical pathogens identified. However, certain diseases remained a complete mystery to medical science.

At the dawn of the twentieth century, the understanding of yellow fever, known colloquially as “yellow jack,” became a priority for the US military when, during the Cuban leg of the Spanish-American war, more than five times as many soldiers died of disease than were killed in action . . .
—Lyzmadness, and you call yourself a scientist!?

For a decade after the release of The Story of Louis Pasteur in 1935, “medical discovery” pictures were a popular genre.
—Metzinger & Metzinger, Silver Scenes

By watching Yellow Jack (1938) this month, we learn more about the medical crises and vaccines that have improved our current states of health.

However, different from the movie, as Scott Ashlin states, a significant number of fatalities from yellow fever had occurred before the means of its transmission was determined in Cuba once and for all (2016).

In avoiding these facts, Yellow Jack sells short the heroism of those involved; while its suggestion that a nurse’s main duties are to look beautiful and be courted is flat-out insulting even if we leave Clara Maass out of the equation. Certainly the true story is not a happy or a pleasant one; but it is a story of courage and self-sacrifice; and one, I would have thought, that laid upon its later interpreters a fundamental obligation to tell the truth.